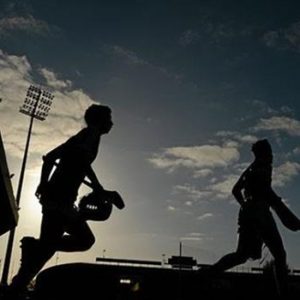 The Cork outfit looked down and out as the clock ticked into second-half stoppages, Ardscoil Rís having hit eight of the previous nine scores to turn a six-point deficit into the narrowest of leads.

The Limerick school’s revival had stemmed from the sending off of Midleton forward Charlie Terry entering the final quarter. The loss of their primary ball-winner had left a massive void in the Midleton attack and Ardscoil Rís assumed total control.

A huge score from centre-back Darragh Carroll on 59 minutes nudged the Limerick students 0-15 to 1-11 in front. In the ensuing passage of play, however, possession was worked inside to Midleton sub Michael Kelly and he was hauled to the floor when attempting to pull the trigger. Referee Willie Barrett signalled for a penalty and extra-time seemed inevitable.

The instruction from the line, though, was to go for goal. Liam O’Shea was handed responsibility and despite a muted run-up, the half-forward rifled the sliotar to the roof of Bryan Curtain’s goal.

Three minutes of stoppages were played, but the champions, bidding to reach a 10th consecutive Harty semi, could find no way through.

“I thought we were out of it,” said Midleton joint-manager Tim Collins. “Liam O’Shea showed all the bottle in the world to stick that penalty. It’s massive for us to be involved in a semi-final.”

A fine David Woulfe score and three Brian Ryan frees turned the tide come the interval, with the latter’s late pull on Terry instigating a shemozzle after which Barrett reprimanded three players.

Midleton midfielder Christy Coughlan saw yellow during this episode and it was his delivery early in the second period which brought about the quarter-final’s opening goal. Liam O’Shea was the receiver, with the half- forward throwing possession across the 20-metre line to the unmarked Liam Gosnell and he made no mistake.

Gosnell swelled his tally with two points and although Brian Ryan attempted to stop the bleeding with his first from play, three without reply from Gosnell (free), Terry and O’Shea sent them 1-10 to 0-7 clear.

Then arrived Terry’s dismissal for a second bookable offence, momentum dramatically shifting in favour of Ardscoil Rís turning the bend for home. Ryan (0-2 frees), Woulfe, Will Henn and James Daly contributed during a six-in-a-row flurry completed by Darragh Carroll’s monstrous lead score inside the final minute.

O’Shea and Midleton would hold their nerve during the tensest of finishes and having lost out to St Colman’s in the opening round, now have a chance to exact revenge.

When – Thursday January 19th at 1:30pm
Where – Bansha
Referee – Willie Barrett (Tipperary)
Next Round – The winners will play Coláiste Cholmáin Fermoy in the Semi-Final on Saturday January 28th.

Match Preview
Bansha will be the venue for the eagerly anticipated Harty Cup Quarter-Final replay between the defending champions – Árdscoil Rís Limerick and CBS Midleton. On Wednesday last, the defending champions Árdscoil Rís entered the drawn game as favourites but CBS Midleton had other ideas and the schools served up a highly entertaining game as the teams could not be separated after 80 minutes of action.

The teams were level 11 times over the course of normal time and extra time showing how little there is between them. Árdscoil Rís had the aid of the wind in the first half and led by three point at the interval. However, CBS Midleton dominated the opening 20 minutes of the second half and led by two points heading in to the final stages. Árdscoil Rís showed their character to come back and when Diarmuid Ryan scored an excellent point in injury time, the teams were destined for extra time.
Despite both scoring goals in the opening period of extra time, neither could pull away and at the end of 80 minutes, a draw was a fair result.

Willie Barrett is the referee for this replay with a 1:30pm throw-in at Bansha on Thursday.