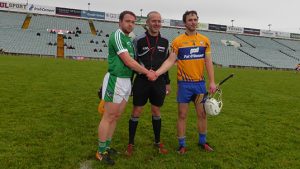 Limerick defeated Clare by 0-16 to 0-10 in the Co-Op Superstores Munster Hurling League Final on Sunday January 14th at the Gaelic Grounds Limerick.

Report by Kieran Shannon for the Irish Examiner newspaper

When Clare sub David Reidy struck over a free with the last puck of this Co-Op Superstores Munster League final for what was his team’s first score in over 25 minutes, the fact it failed to muster a cheer, even of the ironic variety, from the Clare support seemed symptomatic of how redundant this fixture had been reduced to.

For large periods of that second half, Clare gave the impression of a team about as interested in winning back a trophy they won two years ago as Tipperary and Waterford, who didn’t even enter the competition, letting Limerick rack up seven points without reply — and without necessarily having to play especially fluently, either. It would be misleading though to simply dismiss the exercise as meaningless for all concerned.

3,209 spectators made their way through the Gaelic Grounds turnstiles, a bigger crowd than the venue has taken in for a considerable amount of league games this past seven years as the county has found itself stuck in the Groundhog Division that’s 1B. The Limerick team and management certainly took it as an opportunity to further help with preparations for the upcoming league and finally escape from the monotony of life outside the top division.

While it wouldn’t have been something John Kiely would have been necessarily cognisant of, five of the previous eight winners of the Munster League went on later that season to win either a Munster title, a national league, or as was the case with Clare in 2013, the All-Ireland itself, while 2014 winners Tipperary went within a Hawk-Eye call of doing likewise. The chance to win some pre-season silverware wasn’t something such a young team could turn their noses up to at this stage in their development.

“It was a good solid win,” captain Paul Browne would acknowledge, minutes after lifting that item of silverware. “The most pleasing aspect was that some of what we’ve been doing in training the last couple of weeks came to fruition on the pitch. Lads are better prepared this year. Everyone knows their role, knows what they’re supposed to be doing. You saw that out there today — lads were flying around the place and balls were going into hand, even in the poor conditions, and the touch was good, so we’re happy about that.”

What also pleased Browne was how newcomers like Aaron Gillane and Barry O’Connell put up their hand and also, as he put it, “younger older lads like Tom Morrissey” performed so well. Gillane, who scored seven points in last September’s U21 All-Ireland final win, finished with eight here, three from play, while man of the match Morrissey, a member of both the 2015 and 2017 victorious U21 sides, rifled over four from play at wing forward.

As for Clare, joint manager Gerry O’Connor would point out that the game and competition was of some value for his team too.

“Our fullback line was excellent, considering the amount of pressure they were under. And in our half-back line I thought [2017 minor] Diarmuid Ryan was outstanding. If you’re asking what’s the purpose of the Munster League, it’s to find players like Diarmuid Ryan. [Midfielder] Ryan Taylor had a tough first half but it’s ultimately about these guys finding out the level of intensity and physicality that you need to bring to the table.”

As O’Connor would concede though, much of Clare’s problems stemmed from some experienced players struggling to cope with the aggression of their opponents, as much as the heavy conditions.

The Clare management opted to go with the strikingly small and thus imbalanced full-forward line of Shane O’Donnell, Cathal ‘Tots’ O’Connell, and Podge Collins who were simply overpowered, but O’Connor would explain that there was a method in management’s apparent madness. I think physically, Limerick outfought us. Maybe we played a few more mobile, lighter guys that we’d looking to later on in the league and in the championship, and Limerick physically dominated those players at times. [But] Podge hadn’t played a game in three weeks. Tots was injured for our second game. And Shane O’Donnell was away for the Cork game. So you’re trying to blend in new players, you’re trying out more established players in new positions and you’re trying to get game-time under the belt of other existing players. It’s a balancing act because we’re not going to have this luxury [of experimenting] once the national league starts in two weeks against Tipp.”

The Clare forward line generally misfired. They didn’t score their first point until after eight minutes, failed to score in the last 10 minutes of the first half to trail 0-8 to 0-6 at the interval. They came out to reel off the first three points of the second half to momentarily take the lead for the first and only time, but then went scoreless for 25 minutes. Tony Kelly shot five wides and only one point, and while he repeatedly tried to bring his Ballyea clubmate Niall Deasy into the game, Deasy’s touch and radar was off. The only upside was some of the play of Cathal Malone, who followed up his good form with county champions Sixmilebridge with four points from play here.

“I don’t think we trusted ourselves or the conditions to play the ball through the lines,” O’Connor would pinpoint. “We seemed to hit the ball back down on top of their halfback line and their halfback line was dominating. I’d think we could have been better in how we managed the game and how we managed possession.” Limerick were certainly better in that aspect yesterday. And every aspect.

.@LimerickCLG captain Paul Browne with the cup after his side beat Clare to win the @MunsterGAA Senior Hurling League Final at the Gaelic Grounds! @LiveGAAResults pic.twitter.com/UnutCEGCIx

Previews of all of this weekend’s action from the Co-Op Superstores Munster SHC League and the Bord na Móna Walsh and Kehoe Cups. https://t.co/t7EByfwzJZ