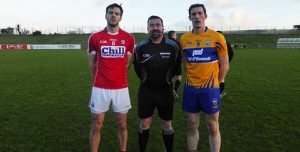 Cork defeated Clare by 3-13 to 3-12 in the McGrath Cup Football Final on Saturday January 13th at Mallow.

Sherlock to rescue as Clare force Cork to play catch-up

For the 691 spectators filing out of Mallow last Saturday evening, there was little doubt about the headline.

Stephen Sherlock’s close-range goal in the 73rd minute had stolen victory for Cork over Clare and won the Rebels their first silverware of the season, the McGrath Cup.

Both managers left Mallow with positives. Cork boss Ronan McCarthy saw his team trail with time almost up, but they created three goal chances in the last five minutes and Sherlock’s cool finish won them the game.

Colm Collins of Clare saw his side fall behind by ten points midway through the first half but a storming 20 minutes after the break got them three points ahead. On the other hand, both nursed nagging worries on the drive home as well.

Cork were overrun by Clare in the second half and couldn’t stem the tide until they emptied their bench; Clare were leading in injury time but couldn’t marshal the bodies in front of goal to deny Cork a match-winning opportunity. Little wonder that was still on Collins’ mind after the game.

“It’s very disappointing to lose a game like that, a goal in the last minute, and we’d feel we could have been a lot better there, but overall we’d be very happy with our second-half display. We took the game to Cork and got some very good scores. There are a good few things to brush up on, but the competition has served us well – and congrats to Cork on the robbery!”

In the red and white corner Ronan McCarthy was still trying to puzzle out the proceedings.

“It’s very hard to know what to make of it. I thought the scoreboard flattered us massively at half-time, when we were seven points up. They were good up front, they moved us around very well, the two goals we got early in the first half gave us a cushion at half-time that, based on the way we played, we probably didn’t deserve. In the second half our energy levels dropped a little and they took over, and then we made a few substitutions and we got some momentum in the last seven or eight minutes. We had three goal opportunities in the last four or five minutes and we managed to take one. It was a funny kind of a game, it’s hard to know what to make of it.”

Both diagnoses were correct. Cork had two goals on the board in the first six minutes thanks to Mark Collins and Sherlock, but Clare were far from outclassed and, as McCarthy said, their movement up front caused the Cork defence issues all evening. Cork were 2-8 to 0-4 ahead late in the half when Keelan Sexton got inside to hammer home a fine goal to leave it 2-8 to 1-4 at the break.

Clare stormed into the second half, hitting 1-4 without reply and they were level at the three quarter stage, when a long ball from Eimhin Courtney squirted past Cork ‘keeper Mark White for a vital score.

Cork emptied the bench, bringing on trump cards like Sean Powter and Ian Maguire, and Clare were pegged back. They saw their crossbar rattled by Pádraig Clancy in the 70th minute and Sherlock had an injury-time shot turned away by Killian Roche.

Sherlock pointed a free to make it a two point game and then hit that dramatic late winner.

“We gave them a dream start,” said Collins, “And while they were very well-taken goals by good Cork forwards, they came from silly mistakes from us. We gave them two goals of a start, and to come back from that to bring it to the last minute – that was good.”

McCarthy acknowledged the Banner quality: “To be fair to Clare, in general play overall they were superior to us in the first half, and in the second half there was a good 20 minutes when they were well on top. We lacked a foothold in the game and I don’t know how it turned, we got some momentum in the last few minutes when fellas threw the shackles off and started chasing the game, and we got a result out of it.”

Cork win out in dramatic finish in Mallow https://t.co/qed0lHche9

The Cork Senior football team to play Clare in the McGrath Cup Final on Saturday 13th January in the Mallow GAA Complex @ 4pm has been announced.https://t.co/Be7qOWE4sd pic.twitter.com/kn85MkuPCT