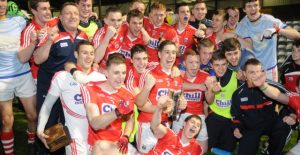 Cork defeated Tipperary by 1-18 to 3-8 in the Cadbury Munster GAA Football Under 21 Championship Final on Wednesday April 9th at Pairc Ui Rinn.

Rebels weather storm for four in a row

Cork 1-18 Tipperary 3-08
It may have been four Munster U21 football titles in a row for Cork but they were made to work for it as Tipperary produced a strong fight back at Páirc Uí Rinn last night. Cork could probably have felt unfortunate to be leading by ‘only’ five points at half-time, 0-12 to 1-4, after dominating much of the first half. A goal from sub Colman Kennedy barely a minute after his entrance had helped to rise Tipp from their stupor, however, and things were to get even better for them upon the resumption.

While a point from a free from Michael Quinlivan was answered by a John Corkery score at the other end, Tipp then really got going. Midfielder Steven O’Brien was on hand to finish after good work from John McGrath and Greg Henry before O’Brien’s midfield partner, Colin O’Riordan, made it a one-point game.

Quinlivan, who scored five of Tipp’s eight points, converted a free to tie matters, but the visitors were unable to push home their momentum. Had Quinlivan nailed a 42nd-minute effort, it might have made things more interesting, but Cork regained their footing instead. Two Dan MacEoin frees sandwiched a brilliant Alan Cadogan effort and then the impressive Seán Kiely opened up a six-point lead with a well-taken goal. Greg Henry ensured that Cork could not relax as he raised Tipp’s third green flag but they could not find the necessary second wind for another comeback.

Cork manager Seán Hayes hailed the character of his side afterwards. “This is the second day that they have done it,” he said, “they did it down in Tralee as well. “They just hang in there, they’re a fantastic bunch of guys that play lovely football and they just kept playing the way that they had, the way it should be played. “Tipp got back level with us, which we didn’t deserve but at the end of the day it’s all about who’s ahead at the final whistle and we were by four points. Everything taken into consideration, I’m delighted.”

Being able to call on so many players with experience of winning, including with the UCC Sigerson Cup-winning side of this spring, was a big factor in the way Cork showed good temperament, according to Hayes. “We had seven on the Sigerson,” he said, “and about eight or nine on the UCC freshers team which won the All-Ireland league. “There were fellas who had played Fitzgibbon, guys who play senior with their clubs, everywhere you look there’s experience and class. When you consider that we were missing Cathal Vaughan, you see how good we are.”

Vaughan is unlikely to be back for the All-Ireland semi-final with Roscommon on Saturday week, but in Cadogan Cork appear to have a real star. As well as standing up when the need was greatest, he was also to the fore as the hosts ran riot in the first half in front of 4,164 people. With Ian Maguire and Killian O’Hanlon dominating midfield and Seán Kiely helping them from wing-forward, Cork broke forward at will, with wing-back Kevin Crowley getting two early points and Brian O’Driscoll – named at 5 but playing 11 – also central.

Their incisiveness was in contrast to Tipp’s slow build-up, with centre-back Séamus Kennedy one of the few to show attacking desire. Cork led by 0-10 to 0-3 after O’Driscoll’s second point in the 24th minute, but then Colman Kennedy netted to breathe new life into Tipp, a good Quinlivan point helping them to believe that is was not over.

It certainly wasn’t, but despite drawing level, they could not find the lead. Cork’s running at the Tipp defence yielded the frees from which MacEoin scored and Kiely’s goal, following good work by John Corkery and O’Driscoll, was no more than his performance deserved. Henry’s goal – via a deflection – halved the deficit to three again with little under 10 minutes left, but this time Cork ensured they closed out matters in a businesslike fashion.

Cork see off Tipp for U21 four-in-a-row

Cork kept their composure as they overcame a Tipperary revival to make it four Munster U21 wins in a row at Páirc Uí Rinn on Wednesday night. Having trailed by 0-12 to 1-5 at half-time, Tipperary began the second half in fine fashion, with points by Michael Quinlivan and Colin O’Riordan augmented by a goal from Steven O’Brien as they tied matters.

Crucially, however, the visitors could not seize the lead and once Cork regrouped they would not be denied, even if Tipperary’s Greg Henry made things nervy when he bagged their third goal. Cork led from pillar to post, with Alan Cadogan and Dan MacEoin heavily among the scores in the first half as Ian Maguire and Seán Kiely did well in the ball-winning stakes. They led by 0-10 to 0-3 after Brian O’Driscoll’s 24th-minute point but Tipperary sub Colman Kennedy gave them hope as he scored a goal within a minute of coming on.

The Cork U21 Football team to play Tipperary in Wednesday night’s Munster Final at Páirc Uí Rinn will line out as follows:

Seán Hayes and his selectors have made three changes in personnel for the Munster Final against Tipperary. Brian O’Driscoll and Kevin Crowley return from injury, with Kieran Histon dropping to the bench and Kevin Fulignati moving to midfield. Killian O’Hanlon moves to the half forward line in place of Cian O’Sullivan, while John Corkery starts at full forward at the expense of David Harrington.

The Tipperary Under 21 Football team to play Cork in next Wednesday’s Munster Final is unchanged from the team which defeated Clare in the semi-final.

The admission price for Adults is €15, while the Student/OAP price is €10. Under 16’s are free of charge. Please note that a €5 discount is available for all Adult tickets that are pre purchased up to three hours in advance of the game at SuperValu and Centra outlets and through tickets.ie.

When – Wednesday April 9th at 8pm

Next Round – the winners play the Connacht champions Roscommon in the All-Ireland Semi-Final on Saturday April 19th.

There is a discount of €5 on all adult tickets that are pre-purchased in SuperValu and Centra outlets and on tickets.ie