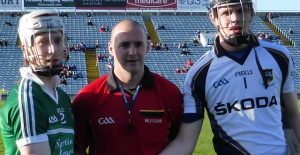 Report by Jackie Cahill for thescore.ie

BRIAN RYAN’S LIMERICK cruised into the semi-finals of the Electric Ireland Munster minor hurling championship this evening, with a nine-point victory over Tipperary at the Gaelic Grounds. The Shannonsiders, featuring ten survivors from last year’s All-Ireland semi-final in their starting line-up, scored three second half goals to set up a provincial semi-final showdown with Cork.

The reigning Munster champions showed their class after half-time as Colin Ryan set up all three of the Limerick goals, with Barry Nash helping himself to a brace. Cian Lynch netted three minutes into the second half to set Limerick on their way but Tipp were back to within a point with goals from Paul Ryan and Andrew Coffey.

Nash, scorer of the controversial point that never was against Galway in the 2013 All-Ireland semi-final, responded a minute later with Limerick’s second goal and he struck again in the final minute to seal a comfortable win. At half-time, Limerick led by double scores, 0-12 to 0-6, with the visitors managing just a point from play in the opening half.

A feature of Limerick’s play throughout was their aerial ability under their own puckouts and this led to a number of scores, with Nash and captain Cian Lynch particularly impressive in this regard. Inside, Colin Ryan was a constant threat, registering 0-5 in the opening half, including three frees. Three points also came from the Limerick half-back line, with Ronan Lynch banging over two long-range frees from inside his own half.

Wind-assisted Limerick finished the half with six wides, compared to Tipperary’s two, a further indication of the home side’s dominance. Tipp’s sole first half point from play was scored by Tommy Nolan in the 13th minute, after the Premier County turned over Limerick possession. Tipperary must now regroup for a semi-final playoff against Clare or Kerry.

The Tipperary Minor Hurling team to play Limerick in Thursday’s Munster first round game at the Gaelic Grounds has been announced. Darragh Peters, Willie Connors and captain Brian Hogan are the only survivors from the team which lost to Limerick in the Munster Minor Hurling Semi-Final.

Visit the Munster GAA web site History section to view the complete list of each winning team since the competition began in 1928 – https://munster.gaa.ie/history/mh_teams/