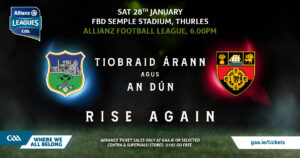 Down defeated Tipperary by 2-11 to 1-11 in Round 1 of the Allianz Football League Division 3 on Saturday January 28th at FBD Semple Stadium Thurles.

14-man Down cling on for win over Tipp to get Laverty up and running https://t.co/PCYPZacyFX

Report by Stephen Barry for the Irish Examiner newspaper

Only one game has been played and Down have already improved on their 2022 tally of wins after their 14 men clung on for a nervy three-point victory over Tipperary.

The Mournemen failed to win any of their nine League, Ulster, and Tailteann Cup games last year but this Allianz League-opening victory over Tipperary breaks a winless streak dating back to May 2021.

Under new manager Conor Laverty, Down went about their task with clinical composure until an element of disarray took hold with Niall McParland’s 40th-minute red card. But Conor Francis’ goal gave them the cushion they needed in front of 1,013 spectators at Semple Stadium.

Down defended in numbers, denying Tipperary so much as a shot from play in the first half, as the Premier’s high ball tactic failed to make any inroads before their bench began to make an impact.

When Down attacked, they went for the jugular. Eamon Brown took a simple scorable free from the 21m line short, seeking a goal, while Barry O’Hagan was reluctant to kick another at the target from 35 metres out in front of the posts. In the end, he hurriedly booted it wide. It was a rare blip in those opening stages.

Pat Havern showed superb movement floating around the attacking zone and kicked their opening two points, the first from a mark, followed by a fine Odhrán Murdock score.

Seán O’Connor had four scoreable frees but only pointed one, on 15 minutes, before being taken off at half-time. Their other two first-half placed balls from distance were taken by Jack Kennedy, scoring a free in the 31st minute.

Down made their winning move at the start of the second quarter, firing 1-3 in the space of six minutes. After slotting two points, Eamon Brown picked out Havern with a brilliant reverse pass that wrongfooted the Tipp cover. The full-forward made no mistake when in on goal.

When Havern added a 22nd-minute point, it was Down’s last of the half.

O’Hagan was black-carded for a late tackle on Teddy Doyle and the visitors set about killing the clock, restricting Tipperary’s efforts to two frees in that 10-minute period. Kennedy’s effort left it 1-6 to 0-2 at half-time.

Steven O’Brien was brought into the Tipp attack at half-time and the big Ballina man made an immediate impact, carving out an opportunity from Sweeney. It was Tipp’s first chance and first point from play in the 38th minute.

McParland was sent off for his second yellow card, after a high tackle, and Tipp supporters started to sense an opportunity as Mikey O’Shea brought the gap back to five.

The teams were trading frees before Mark Russell, just on a sub, kicked two huge points with his first two touches to twice narrow the deficit to four. Each time, however, Down substitute Andrew Gilmore kicked the next point.

Tipp appeared to have given away their chance when keeper Michael O’Reilly got caught under Gilmore’s high delivery and Francis tapped into an empty net. 2-10 to 1-9 after 61 minutes.

But Tipp hit back three minutes later when Doyle capitalised on a loose ball to finish to the net. Donough Leahy, another sub, added the next two points, either side of Gilmore cracking the Tipp crossbar with a vicious shot, to leave it a two-point game entering six minutes of stoppage time.

Havern won and pointed a free to settle Down nerves but they felt shakier when a goal chance fell to O’Brien from a 45. He was surrounded by red jerseys, though, and his shot snuffed out.

Doyle was sent off for a second yellow late on as it ended with 14 men on either side, but Down the happier on the long road home.

The Tipperary senior footballers get their 2023 Allianz football league campaign under way when they welcome Down to FBD Semple Stadium this Saturday evening, January 28th at 6.00pm
Manager David Power has named his team and subs for the game and ir is as follows pic.twitter.com/YJq2bt7YYK