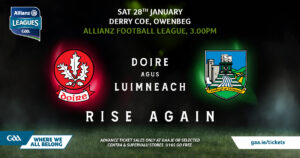 Derry defeated Limerick by 0-16 to 0-4 in Round 1 of the Allianz Football League Division 2 on Saturday January 28th at Owenbeg.

Report by Michael Wilson for the Irish Examiner newspaper

Nine-point Shane McGuigan kicked Derry to a comfortable victory over Limerick in their Division 2 opener at Owenbeg on Saturday.

McGuigan was superb in a game in which the home side never had to get out of second gear to pick up the two points as Ray Dempsey’s competitive debut as Limerick manager ended in defeat.

All the pre-match talk centred on the inclusion of Derry’s Glen trio Conor Glass, Ethan Doherty and Conleth McGuckian and despite rumours to the contrary, both Glass and Doherty started in a strong looking Derry 15.

The Ulster champions were odds-on favourites to start with a win and the one sided opening half did little to dispel the notion, McGuigan hitting four points as Gallagher’s team eased to a 0-7 to 0-2 half-time lead without ever hitting anything like top gear.

Limerick were without last season’s leading scorer Josh Ryan and his absence was keenly felt as the Treaty County saw Adrian Enright register Limerick’s solitary score of a half in which the often sat deep and invited Derry on. The visitor’s kick-out was inviting pressure and Derry had the ball in the net after only two minutes but Lachlan Murray’s joy was short lived as the goal was ruled out with Ethan Doherty having been adjudged to have over carried in the build up.

Derry were far from their best, wayward shooting puncturing their almost constant attacking, but once Paul Cassidy got the scoreboard up and running on seven minutes, there was only one winner.

Niall Toner (free) and McGuigan had Derry three up before Enright’s fisted effort for the visitors but thereafter it was one way first half traffic as McGuigan (3) and Toner eased Derry to their five point interval advantage. It probably could have been more as both Paul Cassidy and McKinless were close to finding the net but despite the lead, the Oak Leaf boss will not have been satisfied with the opening 35 minutes.

The second half was a similarly one way procession for the home side, the only doubt Derry’s margin of victory. McGuigan and Gordon Browne traded scores inside the opening five minutes, as did McGuigan and Iain Corbett, but thereafter the home side regained dominance with a minimum of fuss.

Ethan Doherty had the ball in the Limerick net again but referee Niall Mooney had already blown for a free while Cillian Fahy produced a superb block to stop Murray’s goal-bound effort but the lack or threat at the other end meant those misses were never going to be critical.

Five points in succession from McGuigan (2), Paul Cassidy, Murray and Toner eased Derry to a 0-14 to 0-4 lead more representative of their control with five minutes left.

A late black card for Limerick’s Paul Maher only made the run in al the more comfortable for the home side as both Doherty and Glass were withdrawn in the closing stages.

A beautiful late McGuigan solo effort capped an excellent individual display from the Slaughtneil man, one that brought him nine points, and it was job done for Derry. It was far from perfect and there will be bigger challenges ahead, but Derry had their first win.