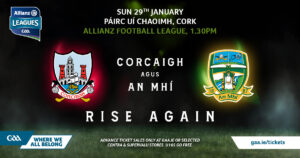 Meath defeated Cork by 3-14 to 0-19 in Round 1 of the Allianz Football League Division 2 on Sunday January 29th at Páirc Uí Chaoimh.

Away day delight for Colm O’Rourke and Meath. Opening round deflation for John Cleary and Cork.

Despite failing to lead this game between the eighth and 52nd minute, two second half goals were crucial in sending Meath back up the road with maximum points.

A significant problem in this latest opening round League setback was the complete lack of spread in terms of scorers. Steven Sherlock kicked all bar five of their 0-19 total. Failure to capitalise on even just one of their many goal chances also hurt the hosts.

Meath’s decisive burst came between the 52nd and 57th minute. During this five-minute spell, they kicked 1-4 without reply to move from three behind to four in front. Jordan Morris with the goal, Jason Scully with the assist.

Sherlock replied with a free. But then another Meath goal. Cillian O’Sullivan the provider. In 10 minutes, they had outscored the hosts 2-4 to 0-1.

Cork had led 0-11 to 1-6 at the interval, seven of those 11 white flags coming from the boot of Sherlock.

It was a first half where Cork were the more dominant side, as evidenced by the fact that Meath managed only one score in the opening 17 minutes. Crucially, though, that score was a Shane Walsh goal, a green flag that kept Meath more than in the hunt at a time when they were second chair in most sectors of the field.

Cork’s use of possession in the opposition half of the field was too lateral. It lacked for incisiveness.

On one occasion where they did cut through, Sean Powter slipping Mattie Taylor inside the cover on 18 minutes, the latter’s goal shot was saved out for a ‘45 by Meath ‘keeper Harry Hogan.

His opposite number Michéal Aodh Martin was equally effective later in the half, producing a superb double save to deny Darragh Campion and Jordan Morris.

The goal chances were far more plentiful in the Meath ledger. And their final product was also sharper.

A positive start for Meath, Cork already under pressure.