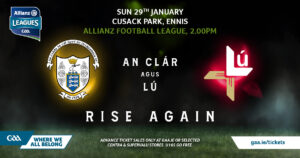 Clare defeated Louth 0-13 to 1-9 in Round 1 of the Allianz Football League Division 2 on Sunday January 29th at Cusack Park Ennis.

Breathless late rally gets Clare off to winning start

A remarkable rally helped Clare get their league campaign off to a flying start in Ennis on Sunday afternoon, when four injury-time points from play saw them come from three adrift to floor a shellshocked Louth.

Clare’s cause looked lost when a 61st minute Ciaran Downey goal that was quickly followed by a Sam Mulroy point looked to have sealed it for Louth as they led by 1-9 to 0-9, but the never-say-die home side produced something special when it mattered most.

Firstly points by Emmet McMahon and Gavin Cooney gave them hope – then some heroic defending kept Louth at bay before another attack yielded an equaliser from Daniel Walsh.

Everyone would have settled for a draw at that stage, but after winning the resulting kick-out Clare poured forward once more and Jamie Malone kicked the winner from 40 yards in the 76th minute.

It was breathless stuff from a Clare side that had been mediocre up to this final flourish. Still, despite being profligate in the second half when hitting ten wides they looked to have done the hard work when taking the lead for the first time in the 60th minute when Malone raided from the half-back line for a point to make it 0-9 to 0-8.

They’d trailed by 0-6 to 0-3 at half-time after Louth were largely dominant when playing with the breeze. The visitors pressed from the off, with pointed frees by captain Sam Mulroy either side of a couple of booming efforts from Conor Early in the 14th and 20th minutes helping them into a 0-4 to no score lead.

Clare finally got off the mark thanks to a close-range free from captain Eoin Cleary in the 25th minute, a point that sparked a revival as Keelan Sexton quickly added two more from play to bring it back to a 0-4 to 0-3 game by the 32nd minute.

However, in the six minutes injury time allowed after Louth’s midfielder Ciaran Byrne was helped from the field gave them the time to reassert their superiority as two more points from Mulroy gave them a deserved interval lead.

These scores, when added to by Downey’s brilliant breakaway goal looked to have sealed the two precious points on the road for Mickey Harte’s side until Clare’s late-late show left them with nothing and bereft at the death.

Clare’s starting 15 and bench for the opening round of the Allianz Football League this Sunday. Throw in vs. Louth in Cusack Park is at 2pm. pic.twitter.com/7OPmPbmqM1