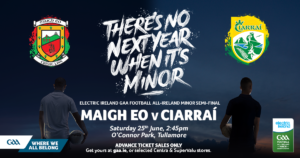 Mayo march on to minor final after victory over Kerry

Report by Kevin Egan for the Irish Examiner newspaper

A first half black card and an incredible one-on-one save proved to be the crucial turning points in this afternoon Electric Ireland All-Ireland minor football championship semi-final in Tullamore, as Mayo edged out Kerry to set up an all-Connacht final against Galway in a fortnight’s time.

It was a contest that failed to catch fire in the early stages, but the Kingdom will have been quite happy with that state of affairs as they scored three of the first four points and looked like by far the better team.

After conceding the first score to a free, points from Darragh O’Connor (Kenmare), Donagh O’Sullivan and Cormac Dillon suggested that they were by far the more threatening side, and even after a wonderful solo goal from Ronan Clarke edged Mayo back in front, Kerry’s response was exemplary.

Odhrán Ferris levelled the game with a majestic point from the right wing, Cormac Dillon put them in front with a point that could have been a goal but for an excellent David Dolan save, then the dancing feet of Paddy Lane made it 0-6 to 1-1, the 15-year-old skipping past three defenders before clipping the ball over from 25 metres out.

As Mayo tried to run the ball out of their half-back line, a body-check from Donagh O’Sullivan saw the Kerry attacked black-carded, and Mayo were quick to use the extra space and make hay. Four points on the spin before half-time completely turned the game on its head, and they made it five through a Ronan Clarke free before O’Sullivan returned to the field.

Now for turning point number two, a remarkable save from David Dolan. Paddy Lane’s trickery was again on show as he spun out from two tackles to put himself clean through on goal, and it looked as if the Austin Stacks player had picked out the top corner with his shot.

Dolan’s positioning was perfect however and he deflected the ball onto the post and gathered it at the second attempt, drawing a huge roar from the Mayo supporters in the stand.

Substitute Darragh O’Connor (Beaufort) fired over the next point from close range, but there was a spring in Mayo’s step now, as players like Luke Feeney, Diarmuid Duffy and Dara Hurley grew increasingly influential in the middle third. However while Keaveney and Clarke added points, they also registered some very poor wides, allowing Kerry to stay in the game.

Donagh O’Sullivan cut the gap to three and Lane added another from a late free, but anything less than a green flag was unlikely to be enough at this stage of the contest, and while Colm Browne had a chance from a narrow angle to be his county’s hero, he too found David Dolan too hard to beat, and one more excellent stop from the Mayo custodian saw his team over the line.

An important Saturday beckons in the Electric Ireland MFC