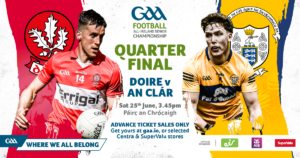 Derry defeated Clare by 5-13 to 2-8 in the GAA Football All-Ireland Senior Championship Quarter-Final on Saturday June 25th at Croke Park.

Report by Paul Keane for the Irish Examiner newspaper

It told a tale about the nature of this one-sided All-Ireland quarter-final tie that Clare had all of their substitutes run in by the 53rd minute.

Desperate for fresh ideas and largely overwhelmed, Colm Collins tried everything he could think of to help haul his Clare team back into it but to no avail. Clare’s Championship campaign is over and Derry march on to a first All-Ireland semi-final since 2004.

After the focus on defence in the Ulster final, this was a much more open game at spacious Croke Park and Derry helped themselves to five goals, not quite the seven Kerry struck against Kildare at the quarter-final stage in 2015 but mightily impressive nonetheless.

Shane McGuigan led the line again with 1-8 while Conor Glass, Benny Heron, Paul Cassidy and Gareth McKinless were all among the goals too.

Derry led from pillar to post and were full value for their double scores, 14-point win which puts them through to a July 9 semi-final clash with Galway or Armagh.

But it’s the end of the line in this year’s campaign for Clare and after nine seasons in the job, Collins may very well consider his position too.

Derry tweaked things tactically by positioning Brendan Rogers, their full-back hero in the Ulster final, at midfield alongside Glass.

Emmett Bradley was initially named to start at midfield but was withdrawn before throw-in and replaced by Niall Toner who lined out in a two-man full-forward line next to Heron.

Meanwhile, Shea Downey, wearing number 11, dropped back to defence to cover the gap in the full-back line left by Rogers.

It was a setup that worked nicely for Derry who gained early control of the game and capitalised with 10th and 13th minute goals from Heron and Glass.

Heron’s goal came after a turnover on Clare goalkeeper Tristan O’Callaghan’s kick-out, clearing Ethan Doherty to play in Heron on the left.

Three minutes later, Glass played a one-two with Doherty on the same side of the field and smashed a shot through the gloves of O’Callaghan.

Suddenly, Derry led 2-1 to no score and had the game in the palm of their hands. If the Ulster final taught us anything about Derry, it’s that they’re entirely comfortably playing a patient, counter-attacking game so the seven-point lead played right into their hands.

Shane McGuigan then came storming into the game with three points to help open up a 2-5 to 0-1 lead and already it was looking like the game may be beyond Clare.

They finally gained a foothold in the contest after 30 minutes of difficulties though and reeled off 1-2 in a matter of four minutes – Pearse Lillis cracking in a 34th minute goal – to reduce the lead to six points.

Just when it looked like Clare might be capable of reeling in what was at one stage a 10-point deficit, they coughed up a third goal to Derry just moments before half-time. Rogers and McGuigan were centrally involved in the buildup and Cassidy eventually capitalised with a terrific finish to the top corner.

It all added up to a 3-6 to 1-3 half-time lead for Derry who went a long way towards killing the contest with a fourth goal from McKinless early in the second-half.

The Ballinderry man broke free down the right and booted to the far corner of the Clare net.

McGuigan then got the goal his performance deserved in the 48th minute and almost struck a second late on when he pounced on an errant kick-out. Still, five was more than enough and while Eoin Cleary, who finished with 1-5 for Clare, pulled back a second Clare goal it was no more than consolation.

Our lineup for Saturday's All Ireland quarter-final 🇦🇹💪 pic.twitter.com/OZYKEemstO