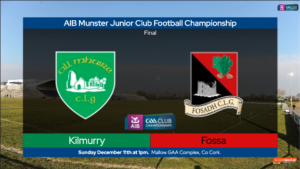 Report by Maurice Brosnan for the Irish Examiner newspaper

The king continues to rise. In sunshine or in sleet, on a summer’s day big stage or a Baltic field in the depths of winter, David Clifford reigns supreme. Fossa are Munster club junior champions. Their prized son adds another jewel to an already glittering crown.

It started with a roar. Kilmurry won the throw-in and took off. When David McCarthy received possession at the edge of the square, the goal was on but his fisted effort crept over. The cheer from the stand was thunderous. It would be 15 minutes before they would score again and once more it was a goal chance. Daniel Cahalane handpassed over an oncoming defender and regathered before rifling over a right-footed effort.

Meanwhile, Clifford started putting the finishing touches on his 2022 masterpiece. It was a diverse tapestry of scores; starting with a free from the 45. He came on the loop and slotted over for his first from play, by now a trademark turn. By half-time his total was six.

To their credit, Kilmurry came to terms with the tie and centre-forward Liam Well can claim the honour of score of the game with a monster from range. After a slow start, Paudie Clifford came to the fore working a one-two from a long-distance free and scoring before adding another just after. At the turnaround, the gap was five.

It was telling and a tribute to coach Éamonn Fitzmaurice that Fossa deployed a full 12-man press after frees. Trickle down tactics in action, a move Kerry successfully used to crack Stephen Cluxton now the method of choice in a junior fixture.

While this junior decider was always likely to be defined by the grandeur of already one of the greatest players in Gaelic football’s storied history, Kilmurry’s spirited challenge deserves praise. At the start of the second half a long kick towards McCarthy saw him win possession out in front and square to Wall who finally raised a deserved green flag. They went after the kick-out and Padraic Berhanu followed it up with a point.

A second yellow for Eoin Talbot saw Fossa reduced to 14 and they needed a response. They got it from their pair of brothers. First, Tadhg fed Emmett O’Shea for his second of the day. Then Paudie Clifford kicked his third and David added three more frees.

As the clock ticked down, the announcer repeatedly pleaded with supporters to not enter the field. An effort to keep the pitch clear for the following game and inadvertently avoid the now routine Clifford invasion.

Heavy lies the head? Not likely.

Cheeky finish from Paudie Clifford to seal the deal for Fossa who powered past Kilmurry in the 3rd quarter.

As the fog rolled in, Paudie Clifford tapped into an open goal for the final act. Off the ball, Fionn Warren swung at David Clifford and was sent off. Then the final whistle sounded and a scattering of shrewd children made their move onto the pitch from the side opposite of the stand and stewards.

They found their hero dancing in clouds.

| @FossaGaa's Fintan Coffey spoke to John Keogh after today's win over Kilmurry. "I don't have the words to describe it properly, it is great" @StreamsportI | @AIB_GAA https://t.co/2ETwjyG70B

| @FossaGAA's Adrian Sheehan on the Clifford's driving standards as they prepare to meet Kilmurry in the Munster Junior Final! Stream Pass👉https://t.co/KqwwCWSNlR https://t.co/W8vmyT1qBM

| @KilmurryGAA's Cormac Linehan on balancing focus between self and the opposition ahead of Munster final with Fossa! Stream Pass👉https://t.co/KqwwCWSNlR https://t.co/SHMBr7AO27