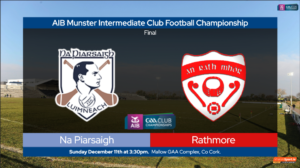 Report by Stephen Barry for the Irish Examiner newspaper

Rathmore continued Kerry’s dominance of the Munster intermediate football grade as they cantered to a facile victory that makes it eight titles in a row for Kingdom clubs and 15 in 16 years.

Derry-native Chrissy Spiers kicked 0-12 as, even without star defender Paul Murphy away enjoying a long-overdue honeymoon a year after getting married, Kerry’s ninth-ranked side had little trouble collecting the cup.

Rathmore had the better of the first half to lead 0-10 to 0-4, eight of those points coming from placed balls. Spiers kicked six of those, while Kerry goalkeeper Shane Ryan, playing at corner-forward, showcased his long-range kicking with a 45 and free. Their points from play came from impressive captain Mark Ryan and John Moynihan.

Na Piarsaigh’s points were spread across the opening half but all four came from play, with Kieran Daly scoring two. They trailed by five when Reuben McCarthy sent Cathal McMullen in on goal but his punched effort was deflected over the bar by full-back Andrew Moynihan.

Rathmore came right down the other end and Cathal Ryan played in Fionn Holohan but Eoghan Sherlock pushed it around the post.

Daly got Na Piarsaigh up and running with a 45 on the restart and he almost had them right back in it when cracking a shot off the crossbar after Dylan Cronin intercepted the subsequent kick-out. When Daly added another from play, the gap was four.

But Spiers added his first from play and kept tapping over his frees. When the goal came in the 44th minute, that ended it. It was Darragh Rahilly who made the incisive run, picked out by James Darmody, and finished to the net. It was his final act, replaced by Mark Reen to cheers from the Rathmore support. The scoreboard read 1-13 to 0-7.

They had another goal, from Cathal Ryan, ruled out for a square ball, before Brian Friel shot tamely into Sherlock’s hands and Sherlock intercepted another sure goal for John Moynihan.

They split seven points from there to the finish, 4-3 to Rathmore, while Daly ended with five points in defeat.