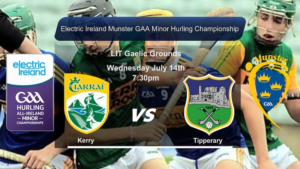 Tipperary defeated Kerry by 2-27 to 1-14 in the Electric Ireland Munster Minor Hurling Championship Quarter-Final on Wednesday July 14th at the LIT Gaelic Grounds.

Report by John Keogh for the Irish Examiner newspaper

Tipperary are into the Munster MHC semi-final following a 2-27 to 1-14 win over Kerry at the LIT Gaelic Grounds.

Three points separated the sides at half time but Daragh Guinan’s goal in the 35th minute saw Tipperary into a eight point lead that they never looked like losing.

Tipperary were playing into a strong breeze in the opening half but it didn’t cause them any issues in the opening 12 minutes as they raced into a 0-6 to 0-1 lead.

Centre forward Conor Martin excelled in that time with two expertly taken points as did corner forward Orrin Jones who was a constant threat.

Kerry’s response was from a Felim O’Sullivan free and another placed ball saw Kerry reduce the gap further but the Martin and Jones double act continued to see Tipperary 0-8 to 0-2 in front at the water break.

Then a Kerry whirlwind blew the game wide open with 1-2 without reply. O’Sullivan and Sean Tuomey-McElligott sent over the points with Killian Boyle flashing to the roof of the net.

However, Tipperary responded two minutes later when Guinan was first to a Minogue mishit and he fired low past Keltyn Molloy to give James Woodlocks’ men a 1-10 to 1-7 lead at the break.

Tipperary came out all guns blazing for the second half and had the game put to bed withing five minutes of the restart. Paddy McCormack and Jones got two points before Guinan flicked to the net after excellent work from Martin.

Kerry did their best to stay in the contest with O’Sullivan leading the charge. He fired over two points either side of Minogue landing a second point of the evening.

It was Minogue that stole the show in the second half with six points and was an a threat that Kerry just could not deal with. Tipperary now go on to play Waterford in the semi-final on July 27th.