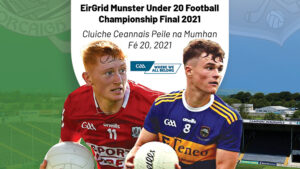 Cork defeated Tipperary by 3-20 to 3-10 in the EirGrid Munster Under 20 Football Championship Final on Thursday July 22nd at Semple Stadium Thurles.

Cork cruise to Munster U20 football title with 10-point win over Tipp https://t.co/ie1qD9R1YD

A far superior Cork cruised to Munster U20 football glory against Tipperary this evening in Thurles.

Seven clear at the break, 1-13 to 2-3, Cork were never troubled during a second-half where their lead grew to as large as 12 points on three occasions.

Any hope of a second-half revival from Tipperary was put to bed inside the opening minutes of the restart as David Buckley and Colin Walsh tacked on points before half-time sub Sean McDonnell delivered a superb individual goal to swell Cork’s advantage to 2-15 to 2-3.

The aforementioned Buckley was the outstanding Cork player on show, the Newcestown forward finishing with 10 points to his name, seven of these kicked from play. Dual star Jack Cahalane, playing his third game in seven days, was another to impress. He had a hand in the creation of so many Cork scores, including their third green flag finished by Walsh.

This evening’s win moves Cork level with Kerry at the top of the Munster roll of honour, both counties boasting 28 titles each.

Keith Ricken’s charges will now meet Leinster winners Offaly in the All-Ireland semi-final in the middle of next month.

Cork already had one hand on the title come half-time, Ricken’s charges ahead by 1-13 to 2-3.

Their seven-point interval lead had its roots in a dominant second quarter during which they outscored Tipperary by 1-7 to 0-1. Included in this was a run of 1-6 without reply between the 22nd and and 29th minute.

Cork had started the half in similarly impressive fashion, racing three in front in as many minutes following points from Dara Dorgan (free), the excellent David Buckley, and Colin Walsh.

This bright opening, however, was wiped out in one excellent passage of play from Paddy Christie’s Tipperary on six minutes, Ben Comerford and Kevin Grogan combining to send through captain Séan O’Connor who finished well.

Ryan Walsh subsequently edged the hosts in front and they breached the Cork defence for a second goal on 10 minutes, Jamie Holloway fashioning a green flag out of nothing really.

Their lead of 2-1 to 0-4 was to prove the high water mark of Tipperary’s evening, though, as from there to the break, Cork outscored the Premier 1-9 to 0-3.

The Cork goal followed thereafter, and what a score it was. Dara Dorgan offloaded to Diarmaid Phelan following a quick sideline on the Ryan Stand side, the full-back then taking off on a lengthy run that ended with the Aghada youngster crashing the ball past ‘keeper Callan Scully.

The latter endured a difficult first-half with his restarts, two of which were sent straight out over the sideline. Those kicked long to the middle of the field were time and again gobbled up by red shirts, this dominance of the Tipperary kick-out the launchpad for so many of Cork’s 14 first-half scores.

And, in truth, Cork could have led by even more than seven turning around for the second-half as they registered six wides to Tipperary’s none, as clear a sign as any as to which end of the field the play was centred in.

It was more of the same in the second period, Cork celebrating a second Munster U20 crown in three years under Ricken’s watch.

This game will be streamed live on TG4 Player (tg4.ie) and the TG4 app.

Deferred coverage of this game will be shown on TG4 from 9pm tonight. 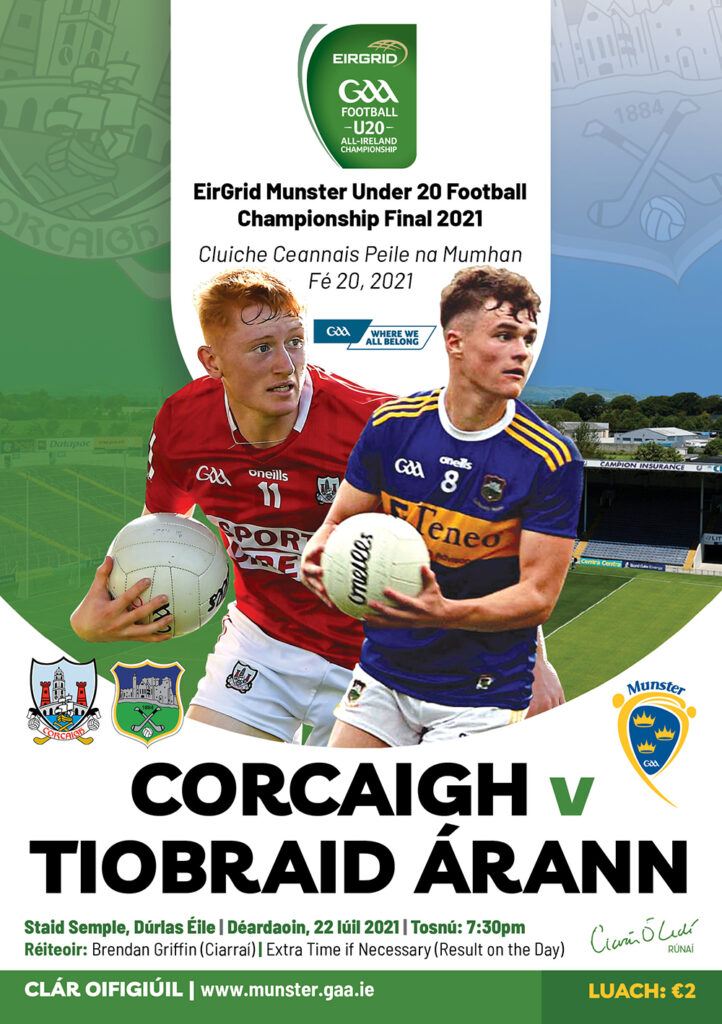 For those attending Thursday’s Final, a match programme will be on sale in Semple Stadium for 2 euro.

Tickets for this game were distributed mainly via the participating counties and no tickets have been returned unsold. As a result, there are no tickets to put on public sale for this final.

Sold out – no tickets for Thursday's EirGrid Munster Under 20 Football Final – @TipperaryGAA v @OfficialCorkGAA have been returned by the counties involved. As a result, there are no tickets for public sale & the game is sold out. https://t.co/Wxk9xiVra4 pic.twitter.com/WJokeBnZNg