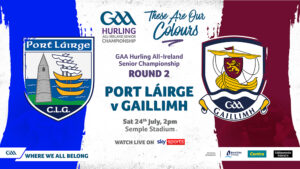 Waterford defeated Galway by 1-30 to 3-20 in Round 2 of the 2021 All-Ireland Senior Hurling Championship Qualifiers on Saturday July 24th at Semple Stadium Thurles.

By John Harrington at Semple Stadium

Another hurling weekend, another epic comeback, but this one fell just short.

It looked like Galway’s final rites were already read when they trailed a rampant Waterford by 1-25 to 0-12 by the 54th minute of this All-Ireland SHC Round 2 Qualifier in Semple Stadium.

But they rose from their death-bed in dramatic fashion with three late goals that transformed what looked like being a procession for Waterford into a white-knuckle ride to the finish.

And were it not for a burst of three points in as many injury-time minutes by Waterford, they might well have conspired to lose a game they dominated for so long.

Had that scenario come to pass, it would have been a real head-scratcher because Liam Cahill’s team played spectacular hurling for most of the match.

They simply ran Galway ragged with their high-tempo hard-running/short-passing game.

The sight of a Waterford hurler backing himself to break through the first tackle and then popping the ball off to a supporting runner on his shoulder was the central theme of the match, and a tactic that ripped Galway open time and again.

The Tribesmen just couldn’t cope with Waterford’s superior athleticism, and didn’t play with anything like the same method either as they relied on hit and hope deliveries into their forwards for most of the game.

That sufficed to keep them in touch for the first quarter of the contest thanks largely to the industry of Conor Whelan, with a scoreline of 0-9 to 0-7 in Waterford’s favour by the first water-break not quite reflective of their dominance.

It was a different story, though, in the second quarter.

Now the blistering runs of Waterford’s half-backs and midfielders who would hit a combined 11 points from play over the course of the game really began to scorch the Tribesmen.

Barron, in particular, hurled like a man possessed in the middle of the field, and his partner Peter Hogan matched him for industry.

In the second-quarter Waterford outscored Galway by 1-9 to two points, with the goal from Jack Fagan on 32 minutes a beautifully constructed score. Dessie Hutchinson made one of many high-rev sprints to race onto Barron’s sideline cut before off-loading to the on-rushing Patrick Curran who played in Fagan. The combination of quick feet, quick-hands, and quick thinking tore the Galway defence open and Fagan finished emphatically for a goal that put his team 10 points ahead.

Goal for @WaterfordGAA a composed finish from Jack Fagan. pic.twitter.com/6eZY0QEyIf

The previously quiet Austin Gleeson then burst into the contest just before half-time with a couple of points that gave his team a 1-18 to 0-9 advantage at the break.

At that stage Galway didn’t look like a team capable of turning the game around, but they were given a boost just before the start of the second-half when referee Sean Stack red-carded Waterford’s Conor Gleeson for an off the ball incident he’d been involved in at the end of the first-half.

His departure didn’t look like it was going to have any impact though as Waterford took up where they left off to dominate the third quarter.

It was the same old story. Their half-backs and midfielders were cutting through ranks of maroon jersies at will to create overloads and overlaps that more often than not led to scores.

Barron, in particular, was sensational with two rousing scores from the middle of the park.

By the second-half water-break Waterford led by 16 points, and you figured they could free-wheel downhill from there.

Not so. Galway suddenly came to life in the final quarter when the repositioning of Cathal Mannion at full-forward gave them a focal point in attack they’d badly lacked up until then.

He scored their first goal on 55 minutes and when points followed from Joe Canning and Evan Niland to cut the gap to 10, Galway’s supporters started to make some noise for the first time in a while.

On the field, their players were also starting to come to life, as Waterford’s 14 men understandably began to wilt in the leg-draining heat.

Points from Canning, Flynn and Brian Concannon had cut the gap to six by the end of normal time, and just as the stadium announcer declared their would be seven minutes of injury-time Flynn got onto the end of a sublime Canning pass to crash home a goal that left just a score between the teams.

With plenty of time left to play and all the momentum behind them, it really now looked like Galway could pull off the mother and father of all comebacks, but a tiring Waterford somehow found the energy for one last vital burst.

Substitute Michael Kiely slung over a fine point and then two Stephen Bennett frees stretched the gap out of six again and you figured you could move back from the edge of your seat.

Not quite. Flynn struck for a second goal to briefly put dread in Waterford hearts again.

Then, when they needed it most, there was one last act of heroism from a Waterford player as Stephen Bennett struck a mighty point from play to finally make the game safe and send his team into the All-Ireland Quarter-Finals.

If their considerable efforts here haven’t taken too much of a toll, they’ll be a hard team to stop now they’ve found their stride again.

There’s one last historical postscript to this match worth mentioning. The nine points that Joe Canning hit today were enough to see him overtake Henry Shefflin as the record score-getter in the history of Championship hurling.

The Portumna man is now out on his own with a tally of 27-485 from 62 Championship matches. Quite the achievement.

Best of luck to Liam Cahill, his management team and all of the panel!#deiseabú ⚪️🔵 pic.twitter.com/rKngDN6QZb