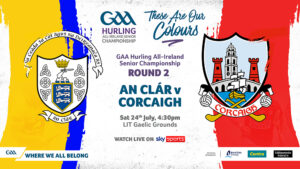 Cork defeated Clare by 3-19 to 1-23 in Round 2 of the All-Ireland Senior Hurling Championship Qualifiers on Saturday July 24th at the LIT Gaelic Grounds.

REPORT: The @OfficialCorkGAA hurlers survived a late @GaaClare rally to book their place in the All-Ireland SHC Quarter-Finals after a dramatic Round 2 Qualifier in the LIT Gaelic Grounds today. #GAA #GAABelong

Cork squeezed through to next weekend’s All-Ireland Senior Hurling Championship Quarter-Finals after relievedly surviving a late Banner backlash in the LIT Gaelic Grounds in Limerick this afternoon.

Three timely goals had steered Kieran Kingston’s side to the brink of their first championship victory by the 66th minute as they held a six point cushion following substitute Shane Barrett’s unstoppable strike. However, similar to the previous two majors, a resilient Banner, in their fourth championship outing, belied the testing conditions to almost snatch a dramatic victory as Tony Kelly earned and converted an injury-time penalty before being teed up once more by Aidan McCarthy, only for goalkeeper Patrick Collins to save the day at the death.

With the sides level on eight occasions up to the final ten minutes, it was Cork’s greater goal threat that ultimately separated the sides, especially in the opening period when a goal at the end of both quarters were real hammerblows to Clare. Patrick Horgan and Tony Kelly’s freetaking duel was finally interrupted by an opportunist goal for Jack O’Connor who outpaced the Banner defence to cut in from the right corner and ensure a 1-5 to 0-6 advantage by the first water break.

Horgan and O’Connor would also be denied by Conor Cleary and goalkeeper Eibhear Quilligan in that opening quarter before the Banner bounced back with a brace of Kelly points to regain parity at 1-5 to 0-8 by the 23rd minute.

A trio of Horgan placed balls did keep the Rebels in the ascendancy before inflicting a second sucker-punch just before half-time when Shane Kingston started and finished a flowing move to billow the net at 2-09 to 0-11.

Despite being shadowed by Niall O’Leary, Tony Kelly finally got the upper hand on the turnover when lifting the Clare supporters with six third quarter points, three from play, to lessen the damage to the minimum by the 55th minute.

Indeed, with the bit between their teeth, Clare actually hit the front entering the final ten minutes after successive points from substitute Shane Golden and Diarmuid Ryan inched their side 0-21 to 2-14 ahead.

It would be Cork’s bench that injected some much-needed impetus into Cork’s attack however as replacements Alan Connolly and Shane Barrett nudged Cork back in front before the latter’s powerful finish following a clever pass from Seamus Harnedy established a six point cushion entering the final minutes.

A Cathal Malone delivery was caught by Kelly in the 72nd minute before being hauled to the ground for a penalty that he dispatched to the right corner of the net as his marker O’Leary was dismissed for a second yellow.

And with the gap now down to two and time effectively elapsed, Clare simply had to go for broke as Kelly unleashed a last gasp effort that goalkeeper Collins tipped away to send the Rebels in to the last six for the first time in two years against either Tipperary or Dublin next weekend.