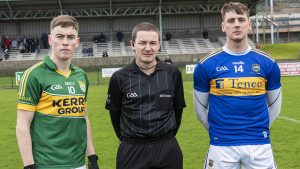 Tipperary defeated Kerry by 1-13 to 1-11 in the 2020 McGrath Cup Football on Sunday January 5th at Clonmel Sportsfield.

Power gets first win as Tipperary hold off Kerry youngsters

Report By Eamonn Wynne for the Irish Examiner newspaper

Tipperary’s senior footballers secured their first win under new manager David Power when they withstood a late rally from a youthful Kerry team in Sunday’s McGrath Cup game in Clonmel.

Tipp looked on course for a comfortable victory when they led by seven points after 17 minutes, and they were six ahead at the midway stage (1-8 to 0-5).

However, a spirited performance from a mostly U20 Kerry side saw them cling onto Tipperary’s coattails throughout the second half and a goal two minutes from the end of normal time from the impressive 18-year-old Paul O’Shea, a first cousin of Kerry star David Clifford, reduced the deficit to a single point.

Tipp managed to survive that late scare and an additional time point from Jack Kennedy put the seal on a deserved victory. With Cork and Limerick already qualified for the final, this match was a dead rubber, but its significance wasn’t lost on Tipperary manager David Power.

“It was important to get a win”, he said. “It would have been deflating going into the League without having beaten Kerry when they were missing so many players.The only thing I’m annoyed about is that it’s a game we should have won a lot easier”.

His team looked destined to enjoy a stress-free afternoon when a point from Jack Kennedy gave them a 1-5 to 0-1 lead in the 17th minute. Their best player, captain Conor Sweeney, had stroked home a second-minute penalty when Liam Boland was fouled, and three points from Sweeney (two from frees) and another from Greg Henry maintained that early momentum. As they went hunting for a second goal, Colm O’Shaughnessy and Dan O’Meara were denied by an outstanding double save by Kerry goalie Deividas Uosis in the 20th minute.

“We should have been really killing the game by half-time”, said Power. “Even throughout the second-half we were leaving them in the game. That sums it up with the turnover that we gave them, it shouldn’t be happening at this level”.

The victory kick started Power’s managerial reign following a heavy defeat by Cork (3-19 to 0-14) in their opening game in the competition. “We’ve used 36-37 players over the two games, that’s a positive”, he said. “Last Sunday and Monday we were in Dublin on a training camp. We played Thursday, trained Friday and played today. It’s been a busy week.

“There was a lot of good work, we’ve got a good bit of work to do over the next three weeks. We’re going in the right direction. It is going to take a bit of time, and our focus is the Down match (in the league) and getting ready for that in three weeks time. It’s just a work in progress and it will take a bit of patience as well”.

With the Kerry team on holidays in Thailand, U20 manager John Sugrue took charge of the side in Clonmel, which was their second defeat in as many games after Cork defeated them by 6-19 to 2-9 in the opening round.

“We’re after losing another game, it’s not ideal but a lot of guys got good work into them and hopefully that will stand to us with regard to the physicality and intensity of that game, and the duration of it”, he said.

“Hopefully that is in the bank with lads, and it will benefit our fellows on the U20 squad and hopefully some of the senior guys will get some benefit as well. The McGrath Cup has been used for Kerry to be represented in it (the competition). We spoke with the chairman about bringing something to the table with regard to representing Kerry and the seniors threw in their lot as best they could.

“We’ve got games into fellows on both days (against Cork and Tipp) and hopefully that will stand to us.”

The Tipperary team to face Kerry in the McGrath Cup tomorrow has been revealed by manager David Powerhttps://t.co/YXlucD9xCR pic.twitter.com/Rpx0fsr6d6