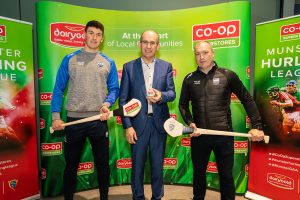 Cork defeated Waterford by 1-17 to 1-13 in the 2020 Co-Op Superstores Munster Hurling League on Sunday December 29th at Fraher Field Dungarvan.

Report By Michael Moynihan for the Irish Examiner newspaper

This Co-Op Superstores Munster SHL clash went to Cork, victors over Waterford in a soggy Fraher Field with 2,976 in attendance.

Cork defended the dressing-room end and opened with a Conor Lehane point, only for Patrick Curran (free) to equalise. Curran struck for a fine goal on eight minutes; Robbie O’Flynn levelled on 11 minutes, 0-4 to 1-1.

Both sides struggled with the greasy conditions but a Lehane 65 nudged Cork ahead on 26 minutes; his club mate Tommy O’Connell, just on as a blood sub for Sean Twomey, netted immediately afterwards from a long ball out of defence: 1-7 to 1-3.

The visitors added three points – Lehane and a Jack O’Connor brace – before Stephen Bennett landed a free. A Darragh Lyons long-range effort in injury time left the score 1-10 to 1-5 at the break.

Waterford resumed with three wides before Curran pointed two frees: 1-10 to 1-7 on 43 minutes.

Meade and Curran swapped points but another Curran free made it a two-point game. O’Flynn and Aidan Walsh pointed for Cork to make it 1-13 to 1-9 at the three-quarter stage.

Shane McNulty, Curran and Kevin Moran hit three on the spin to cut Cork’s lead to one entering the last ten minutes.

Lehane (free) and Walsh pushed Cork three ahead, with Waterford sub Calum Lyons responding from range to make it 1-15 to 1-13 with five left.

Sub Tommy O’Connell stretched Cork’s lead to three as the game went into injury time, and the visitors saw the game out to the end.

Best of Luck to Liam Cahill, his management team & all the panel pic.twitter.com/J9JIE89WPg