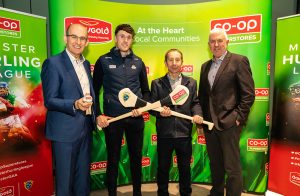 Cork defeated Kerry by 1-27 to 0-11 in the 2020 Co-Op Superstores Munster Hurling League on Friday December 20th at Mallow.

The first game on Kieran Kingston’s return as Cork senior hurling manager was a victorious one at bitterly cold and sometimes wet Mallow tonight.

Youth and experience proved to be a winning combination as they gradually pulled away to see off their neighbours Kerry in the first round of the Co-Op Superstores Munster hurling league.

The straight-forward, and expected, victory in front of 250 spectators sets them up nicely for their final group game away to Waterford Sunday week.

When these two counties met last year in this competition, it resulted in a rare win for the Kingdom. However, there was never any hope of that being repeated.

The more familiar Rebel names of Shane Kingston, Luke Meade, Tim O’Mahony, Seán O’Donoghue and Damien Cahalane successfully backboned Kingston’s side – the manager made one change from the team announced earlier in the day with Shane Kingston replacing Conor Lehane.

Shane Kingston, Sean Twomey, Chris O’Leary, Robbie O’Flynn and Michael O’Halloran all rowed in in the point-taking stakes, while Ryan Walsh secured the only goal of the game six minutes into the second half.

Boss Kingston was obviously delighted with the result, and the overall display.

“We are happy, we had a very young team tonight, some of the lads who are not on our panel but were in for the night. We would have to be happy with their commitment and their attitude. They were trying to do the right thing which is all we can ask for.

“We scored 1-27 and had about 20 wides on top of that. We are a bit rusty. We are only back training a few weeks. We have a lot of gym work done, not a lot of hurling. From that point of view, you would have to be happy with a number of fellas who put their hand up tonight.”

Cork led 0-15 to 0-7 at the interval but they also shot 10 wides to Kerry’s seven. The visitors went toe-to-toe with the hosts for the first quarter, Kingston and Robbie O’Flynn were sharp for Cork while Shane Conway was the pick of the Kerry forwards

Twice Cork came near to goal on the run up to half-time, but Kerry custodian Martin Stackpoole denied Kingston both times. At the other end, Sean O’Donoghue did well to avert the danger near his goalmouth area.

Cork put some distance between the teams approaching the break. Sean Twomey rifling over a brace from distance and O’Flynn landing his third point to give the Rebels a half time lead of eight points.

It was Kerry’s turn to be wasteful in the second half as Cork piled on the pressure. They moved 0-16 to 0-7 ahead before Walsh got through for goal six minutes after the restart. Kerry only added another four points which was testament to a solid Cork rearguard that was headed up by O’Donoghue, O’Leary and Cahalane.

Both sides called in their replacements in the second half. And there was no let up from the winners with Cork’s Mark Coleman also getting in on the scoring act.