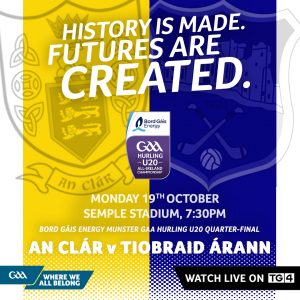 Tipperary defeated Clare by 1-19 to 0-12 in the Bord Gáis Energy Munster Under 20 Hurling Championship Quarter-Final on Monday October 19th at Semple Stadium Thurles.

Report By Shane Brophy at Semple Stadium for GAA.ie

Tipperary blitzed Clare in the second half to progress to the semi-finals of the Munster Under 20 Hurling Championship at a rain-sodden Semple Stadium.

The Premier County trailed by four points at half time but outscored Clare 1-13 to 0-2 in the second half to set up a semi-final against Waterford next Monday.

Despite being minus the services of injured captain Aidan McCarthy and Shane Meehan in attack, Clare started brightly with Connor Hegarty and William Halpin on target within two minutes.

Tipp quickly got into their stride with Andrew Ormond lively in the early going with two points before he struck the post with a goal chance. A Conor Bowe point followed by Gearoid O’Connor free had Tipp two in front before Clare made a tactical switch to being Cian Galvin back as an extra man and from there to half time the Tipp forwards were tied up, restricted to points from Conor Bowe and a Devon Ryan free, after Gearoid O’Connor had miss-fired.

Clare’s half back line and midfield took over and provided an ample supply of ball to their inside forwards where Mark Rodgers in particular was a major thorn pointing twice from play and also set up Robin Mounsey for a fine score.

Cian Galvin added two from frees and in his deep role, he was able to rove forward into space and landed two long range points to help Clare into a 0-10 to 0-6 half time lead.

Whatever manager John Devane said to the Tipp lads at half time certainly worked as they upped the workrate and took control as they went from four points down to seven points up shooting eleven points without reply with Conor Bowe to the fore bringing his tally to seven from play while Ormond, Devon Ryan and Kevin McCarthy were all on target.

It took Clare a full 27 minutes to register a second half score through Cian Galvin with Mark Rodgers reducing the margin to five when Tipp were awarded a penalty when Andrew Ormond was pulled down and Devon Ryan converted low to the keepers right.

Devon Ryan with a penalty goal for Tipperary pic.twitter.com/9OO1jwYDTR

Sean Ryan and Kevin McCarthy rounded off an impressive second half performance from the defending Munster and All Ireland champions. 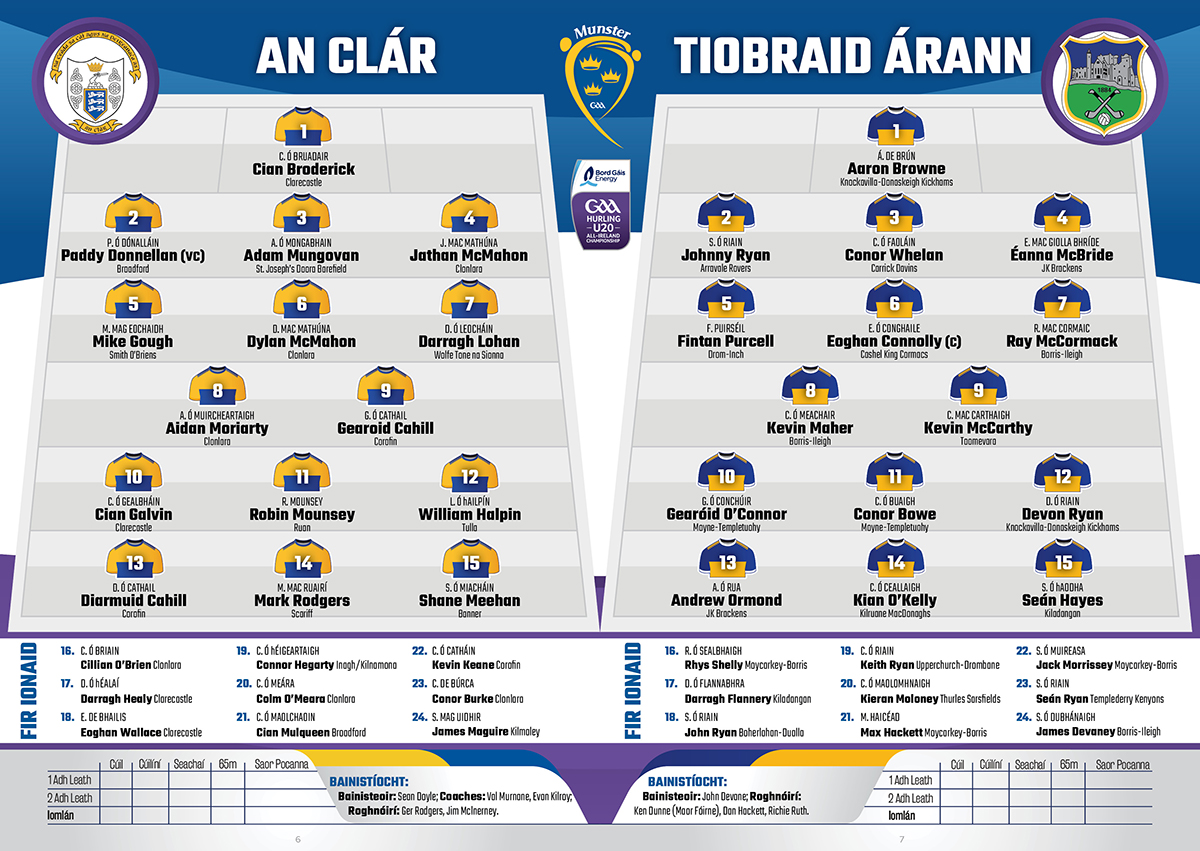