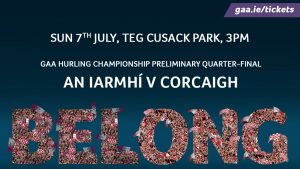 Cork defeated Westmeath by 1-40 to 0-20 in the preliminary quarter final of the GAA Hurling All-Ireland Senior Championship on Sunday July 7th at TEG Cusack Park, Mullingar.

Report By Conor McKenna at TEG Cusack Park for GAA.ie

Cork advanced to face Kilkenny in the All-Ireland quarter finals, after a 23-point win over Joe McDonagh Cup finalists Westmeath.

Westmeath were underdogs going into the game and they set up very defensively in order to frustrate Cork with Eoin Price playing as an extra defender.

John Meyler’s side still scored 24 points in the opening half and they were completely dominant throughout the tie.

This was an ideal performance from Cork and they did not pick up any injuries during the game and Meyler’s charges will hope to have Aidan Walsh available for selection next week.

Cork scored 1-40 over the course of the game and they were accurate with their shooting all over the pitch, with the away side producing some excellent, exciting hurling for those on view.

Cork brought a huge crowd to Mullingar and completely outnumbered the home support and it was Alan Cadogan who opened the scoring with a point after 15 seconds, before a free from Killian Doyle levelled proceedings.

Points from Cadogan and Bill Cooper gave Cork a two point lead, which was halved following a point from Price.

Cork registered the next six points in succession to leave the gap at seven points with 13 minutes played and the game was all but over as a contest at this juncture.

Cork pushed on before the interval and held a commanding 0-24 to 0-9 lead at half time, with Westmeath only playing for pride in the second half.

Robbie O’Flynn found the net for the games only goal in the 41st minute, after a pass from Patrick Horgan and O’Flynn was very impressive when introduced in the second half, scoring 1-4, all of which came from play, to increase his chances of a starting berth next week.

Westmeath were reduced to 14 men, after Gary Greville was shown a red card in the 69th minute, after picking up two yellow cards.

Cork eased to a 23 point victory, though tougher tasks await the Rebel County, who have lost two successive All-Ireland semi-finals.

The Cork Senior Hurling team to play Westmeath has been announced. https://t.co/xEzZtzNGDp