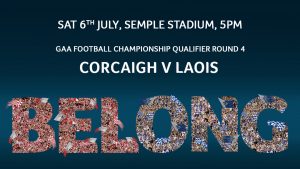 Cork defeated Laois by 4-20 to 1-15 in Round 4 of the GAA Football All-Ireland Senior Championship on Saturday July 6th at Semple Stadium Thurles.

REPORT: @OfficialCorkGAA are through to the All-Ireland Quarter-Final series after a convincing victory this evening over @CLGLaois.

Report By John Fallon at Semple Stadium for GAA.ie

Cork put their Munster final defeat behind them to qualify for the All-Ireland Quarter-Final series with an impressive win at Semple Stadium in Thurles.

Brian Hurley and Mark Collins did most of the damage as Cork took control before the break and then wrapped up the win in the third quarter.

The sides were level on four occasions in the opening half but Cork pulled away before the break to lead by 0-12 to 0-7. Collins and Hurley posed a big threat up front for Cork and they kicked 0-9 between them in the opening half.

Collins landed six, three of them from play and Hurley posted three in addition to being a good target man for ball from out the field. Donie Kingston was dominant in attack for Laois and kicked five points in the opening half, four of them from frees.

Cork finished the half impressively with Ronan O’Toole, Hurley, Ruairi Deane and Collins hitting the target as they went in leading by five at the interval.

Cork brought in Paul Kerrigan at the break and he made an immediate contribution, with his long delivery being knocked back inside by Collins for Hurley to sidefoot the ball to the.

Liam O’Donovan followed up with a fisted point for Cork to lead by 1-13 to 0-7 and leaving Laois with a mountain to climb. That task became ever more difficult when Hurley blasted home his second goal after 42 minutes.

Hurley then turned provider to set up Collins for Cork’s third goal after 52 minutes to push them 3-17 to 0-9 in front.

Laois never gave up and Martin Scully found the net going into the final quarter to reduce the deficit but Cork hit back with a goal from Paul Kerrigan to seal an impressive win.