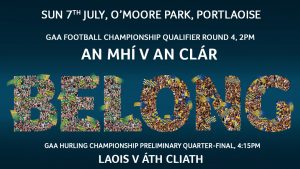 Meath defeated Clare by 2-16 to 1-18 in Round 4 of the GAA Football All-Ireland Senior Championship on Sunday July 7th at O’Moore Park, Portlaoise.

Report By Cian O’Connell at O’Moore Park for GAA.ie

At the end Andy McEntee’s turned to embrace selectors Donal Curtis and Colm Nally with a mixture of joy and relief.

Meath had survived a wild and furious encounter to earn a passage into the last eight of the All Ireland Championship. Ultimately that what was mattered most of all.

With promotion to Division One of the Allianz Football League secured for 2020 this has been an encouraging campaign for Meath, who found the requisite answers against Clare.

Colm Collins’ gritty and resilient charges fought until the bitter end, but just couldn’t do enough scoring damage in the closing stages.

In the opening half Clare had posted 0-12 from 19 attempts, but in the second period that was restricted to 1-6 from 12.

Meath just edged the game by the narrowest of margins with goals from Bryan Menton and Mickey Newman the decisive blows.

An absorbing first half was packed with drama and quality scores as the teams eventually departed level in front of a passionate audience.

Clare contributed handsomely and even when falling two points behind on the stroke of half-time following a Bryan Menton goal, Colm Collins’ charges responded.

Gordon Kelly ventured forward to nail an inspirational point and that was followed by a sweet Jamie Malone effort to ensure parity was restored.

The issue was certainly delicately poised after an opening period in which Clare and Meath were level on six occasions.

Newman was sharp inside for Meath clipping five points before the break, while James Conlon dashed about also clipping two fine efforts.

At the opposite end of the field Malone, brimful of intent, mined four from play, while captain Gary Brennan led by example.

Forcing turnovers and stitching the play in a diligent and clever manner Brennan demonstrated his class against a durable Meath outfit.

As the interval approached Malone edged Clare a point in front before Menton reacted smartly to blast a Meath goal.

It was one of those defiant Clare displays, though, with Kelly and Malone replying briskly to tie matters at the end of a thrilling 35 minutes of football.

When the action recommenced it remained intriguing as Newman (free) and Conlon guided Meath in front prior to a Gavin Cooney goal.

Newman was sufficiently crafty to palm a goal following an exchange with Padraic Harnan, while Donal Keogan and the hard working Ethan Devine guided the Royals 2-13 to 1-12 clear in the 44th minute.

From then until the finish it continued to supply thrills and spills with Meath substitute Ben Brennan steering the Royals three ahead in additional time.

Clare still refused to wilt. David Tubridy stroked over a free and replacement Dermot Coughlan drilled a last gasp point, but Meath held on. A significant Royal triumph was registered.

Just one change to the @Clare team for this weekends last 12 fixture with @MeathGAA
Kevin Hartnett replaces the injured Conall O Hainiféin pic.twitter.com/wQ4g2r7NGI