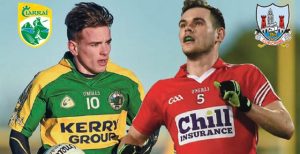 Cork defeated Kerry by 1-12 to 1-9 in the EirGrid GAA Football Under 21 Munster Championship Semi-Final on Wednesday March 18th at Pairc Ui Rinn.

Cork 1-12 Kerry 1-09: Last September’s All-Ireland minor football final win, from which seven players featured yesterday evening, restored power to the Kingdom circuit lines and roused a large travelling contingent onto the N40 in expectation of a first Munster U21 championship win since 2012.

By 9pm, the county’s underage factory lay in darkness, another spring malfunction materialising. “The difference between this week and last week is phenomenal,” said Cork manager Sean Hayes. “We touched on that performance after that game, again on Thursday, Saturday, Monday and even again tonight. They ground out the result last week, they did the same here.”

Three frees from the right boot of Conor Keane moved Kerry 1-5 to 1-4 ahead directly upon the change of ends. On 36 minutes, a Kerry player was adjudged to have touched the ball on the floor. Free Cork. Sean O’Donoghue split the posts to achieve parity. Sean White, Peter Kelleher and Cathal Vaughan (free) swapped points with the ever-accurate Keane (three frees) – the Legion corner-forward assuming dead ball duties following Jack Savage’s black card on 15 minutes.

Kerry remaining in contention by virtue of Cork’s indiscipline. Indeed, had visiting goalkeeper Shane Ryan not produced a smart save to deny O’Donoghue entering the final quarter, this result would have been wrapped up well before the hour mark. In any event, Sean White and Conor Horgan kicked successive points on 48 and 50 minutes. It moved Cork 1-10 to 1-8 in front, the first time in the second-half that more than two points had separated the teams. Conor Keane missed a run-of-the-mill free turning the bend for home and further white flags from Horgan and Brian O’Driscoll secured Cork a fifth consecutive Munster final appearance.

The winners had returned to the dressing-room for the interval break 1-4 to 1-2 in front and Hayes’ charges must surely have been scratching their heads as to how they did not enjoy a more substantial lead. For when Kelleher intercepted Matthew Flaherty’s pass, teeing up Sean O’Donoghue for the contest’s opening goal, it crowned a spell of unstinting dominance from the home outfit. Seven minutes in and Cork’s lead stood at 1-2 to 0-0. And in truth, it could have been double that. Cathal Vaughan (’45) and Peter Kelleher supplied the two white flags, but both were guilty of missed chances.

Cork’s superiority continued, so too their rising wide count, Darragh Murphy and Brian O’Driscoll off target. On 12 minutes, a foul on Matthew Flaherty, carrying out the sweeper role for Darragh O Sé’s side, enabled Jack Savage open their account. Savage and Conor Keane both wasted scoreable opportunities subsequently, but the latter earned redemption on 19 minutes. Dara Roche’s delivery was poorly dealt with by Cork ‘keeper Michael Martin, Keane gathered and slotted the ball into the left corner of the net.

Keane supplied the equaliser on 25 minutes, scarcely believable in the overall context of play. By this juncture, though, Barry O’Sullivan and Ronan Murphy were making their presence felt around the middle for Darragh O Se’s side. Cork rallied and while further questions were asked, they were not to be found wanting.

Munster U21: Cork overpower Kerry in the end

Cork remain on course for an unprecedented fifth Munster U21FC title in a row after they came good late on to see off Kerry in tonight’s semi-final in Páirc Uí Rinn. In a game which ebbed and flowed, the second half provided more quality than a pedestrian first period and the lead changed hands as the sides enjoyed different periods of momentum.

A point from Kerry attacker Conor Keane – his sixth – tied matters at 1-8 each in the 48th minute but the visitors would only score once more as Cork found an extra gear. Centre-back Seán White scored an inspirational point, his second of the game, to put Cork ahead again and then sub Conor Horgan got on the scoresheet with practically his first touch.

While Keane responded with a Kerry free just after missing another, Cork were not to be denied and captain Brian O’Driscoll kicked a fine point before Horgan got his second. Cork began the game excellently, with points from Vaughan and Peter Kelleher getting them off to a good start before Seán O’Donoghue netted an eighth-minute goal, surging towards goal and finishing well after a break had fallen to him.

Kerry’s tactic of playing a sweeper wasn’t working as Cork played with seven forwards but slowly the Kingdom got on top at midfield. Jack Savage opened their account and though he was lost to a black card it didn’t unduly affect them. Keane scored a fine goal on 25 minutes after Cork goalkeeper Micheál Martin failed to deal with Dara Roche’s delivery and then the corner-forward levelled. Cork added two points in the closing stages through Vaughan, however, and they would have three to spare at the end.
***
Scorers for Cork: C Vaughan 0-4 (0-3f), S O’Donoghue 1-1 (0-1f), P Kelleher, S White, C Horgan 0-2 each, B O’Driscoll 0-1.

Adults: €10.00
Students/OAP’s: €5 tickets on the gate or receive a €5 concession on Adult €10 tickets bought at designated turnstile prior to entry.
Under 16s are free and not required to have a ticket to attend this game.

This fixture is unreserved. Tickets are available to purchase in advance at selected Centra & Supervalu stores.

The Kerry U21 team to play Cork U21s in Pairc ui Rinn on Wednesday night has been named. http://t.co/PvefxlYwjA pic.twitter.com/xVnmHM6ai7

The Cork team lines out as follows –

Not considered due to injury:

Munster Under 21 Football Cup
Corn na Cásca presented by the Football Council in 1966 to commemorate the jubilee of the 1916 Rising.