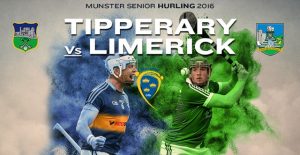 Tipperary defeated Limerick by 3-12 to 1-16 in the Munster Senior Hurling Championship Semi-Final on Sunday June 19th at Semple Stadium Thurles.

Limerick still couldn't get past Tipperary despite John O'Dwyer's sending off https://t.co/oostfmtksw pic.twitter.com/zutOU8oqIe

The loss of John O’Dwyer to an early red card didn’t deter Tipperary from confirming a second successive Munster final date with Waterford.

Limerick never looked like making the most of their numerical advantage and it was Tipperary, led by Cathal Barrett in defence, who looked like they had the extra man for large swathes of the game.

O’Dwyer will miss the July 10 final through suspension but this latest victory in front of 25,531 supporters in difficult playing and numerical conditions will give Tipperary plenty of encouragement.

Tom Morrissey’s injury-time goal after Darren Gleeson had saved from another substitute Kevin Downes gave Limerick supporters a small hope but Tipperary saw out the remaining action with little fuss.

Michael Breen, who found the net against Limerick in last year’s corresponding fixture, was given the chance to make amends when after running through he gave a poor hand-pass into Callanan. Dan Morrissey slipped up trying to gather possession and the midfielder’s ground stroke beat Nickie Quaid.

The Limerick goalkeeper was picking the sliotar from behind him again in the ninth minute. After Callanan was set up by Patrick Maher, Breen was quick to react to Quaid’s save and Tipperary were 2-0 to 0-1 up.

The game took a different complexion in the 14th minute when O’Dwyer deservedly saw the line for a strike on Richie English and the next three points came from Limerick. The margin was cut to one but then Callanan followed up with 1-1 in the space of a minute, his goal assisted by Noel McGrath as Limerick were cut open again.

Limerick once more reduced the difference to a solitary point but a brace of scores from Callanan ended the half to leave it 3-5 to 0-11 in Tipperary’s favour.

The Tipperary Senior Hurling team to play Limerick in the Munster Championship Semi-Final in Semple Stadium on Sunday next, June 19th at 4pm has been announced by manager Michael Ryan.

There is one change in his side which sees Patrick Maher from Lorrha Dorrha return for his first full start since injury ruled out his starting inclusion in Tipperary’s recent league run.

MOST RECENT CHAMPIONSHIP GAME
Tipperary 4-23 Limerick 1-16 (2015 Munster semi-final)
Seamus Callanan scored 2-5, John O’Dwyer 0-7 and Jason Forde 1-3 as Tipperary romped to victory in the Gaelic Grounds before going on to take the title when beating Waterford in the final.

2016 CHAMPIONSHIP
Limerick are having their first outing in this year’s championship while Tipperary beat Cork by 0-22 to 0-13 in the quarter-final.

THE ROAD AHEAD
The winners will play Waterford in the Munster final on July 10; the losers enter the All-Ireland qualifiers on July 2.