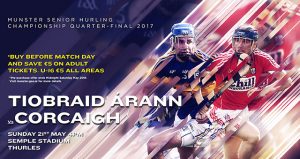 Cork defeated Tipperary by 2-27 to 1-26 in the Munster Senior Hurling Championship Quarter-Final on Sunday May 21st at Semple Stadium Thurles.

After the final whistle blew on this epic game of hurling, the Semple Stadium pitch quickly turned red. You don’t normally associate Munster quarter-finals with pitch invasions, but the explosion of joy that greeted their team’s win under-scored just how big a result this was for Cork hurling and their supporters.

The Rebels have been down for longer than they’re used to, but this win, and nature of it, felt like a rebirth of sorts. They didn’t just beat the All-Ireland champions on their own patch, they did so with the sort of flair and grit that was long the hallmark of successful Cork hurling teams.

Tipperary were torn apart at times by the fluency, speed, and ruthless finishing of his Cork team. All of Cork’s forwards were superb, but Conor Lehane, Shane Kingston, and Patrick Horgan in particular took a wrecking ball to the Tipperary defence.

It wasn’t just Cork’s pace and power in attack that caught the eye, there was also a steely approach in defence that has been marked absent for too long. Colm Spillane and Mark Coleman were particularly heroic throughout, but it was the collective effort that proved most critical in the final 20 minutes of the game.

From the very start, this match took on a very different aspect to the Munster Quarter-Final the two teams contested last year. Back then it was a grey, wet day, and Cork’s decision to play with an extra man in defence leached even more of the colour out of the occasion.

Tipperary conceding too much pic.twitter.com/VEPA9b7s4B

This time around things were very different. Cork backed themselves to go toe for toe, man to man with Tipperary, and with both teams committed to attack it was an open, free-flowing game from the off.

One of the variables coming into the game was just how Cork’s young guns would cope with the heat of a high-stakes Championship match against the reigning All-Ireland Champions.

So the extent to which all five of them all played with such confidence from the very start was a huge boon for Cork and really laid down a marker.

Spillane caught some great ball in the full-back line, Coleman’s deliveries from the half-back line were excellent, Fitzgibbon was busy in midfield, Kingston’s athleticism was hugely impressive, and Meade’s movement and finishing was top-class.

One of the stand-out features of the game throughout was the manner in which the Tipp half-back line was being dragged out of position which left acres of space in front of their full-back line.

That’s never an ideal scenario against a Cork inside forward line blessed with real pace and finishing power in the shape of Alan Cadogan, Patrick Horgan, and Seamus Harnedy, and by the eight minute both Tipperary full-back James Barry and corner-back John O’Keeffe were on yellow cards as they were forced to tackle desperately.

By that stage in the game we already had a shoot-out on our hands with the teams level on five points apiece, and the action didn’t let up from there. As much as the Tipp defence was struggling to contain the Cork attack, at the other end of the field they looked extremely dangerous themselves.

Centre-forward Michael Breen was winning his battle against Mark Ellis, and John ‘Bubbles’ O’Dwyer was looking sharper than at any time since last year’s All-Ireland Final. Much of his work was self-less too, as he assisted four first-half Tipperary points with some slick passing. As the half progressed, the action never let up as it swung from one end of the pitch to the other and blow was met by counter-blow.

When the half-time whistle blew the teams were level at 0-15 apiece, but it was the Cork supporters who rose to their feet to applaud their team off. This wasn’t just an acclamation of how well their young team were hurling against the All-Ireland champions, it verbalised the growing sense in the ground that Cork were more up for this battle than Tipperary were.

The All-Ireland champions were somehow keeping pace despite being half a yard behind their men to the majority of balls, but in the second-half Cork’s greater appetite and athleticism ultimately told. The first big breakthrough came on 43 minutes when Shane Kingston scored a goal that Tipperary goalkeeper Darren Gleeson will have a few sleepless nights about next week.

Kingston’s initial shot was hooked/blocked by a trio of Tipp tacklers, but he collected the ball again and somehow got off a shot that bounced over Gleeson’s hurley and into the back of the net.

Tipperary’s initial response was positive as they scored the next two points of the match, but Cork just never let up as Conor Lehane in particular came roaring into the game at centre-forward.

Tipp were staying in touch thanks mainly to the heroism of Michael Breen who would finish the day with six points form play, and then it looked like they’d seized the initiative when John McGrath blasted a goal after a brilliant pass from Seamus Callanan.

But Cork simply refused to be denied and immediately struck back with two points from the by now on-fire duo of Kingston and Lehane.

Tipperary were struck a sickening blow when their best defender Cathal Barrett was forced off after 62 minutes with what looked like a bad knee injury, and slowly the self-belief seemed to drain from Tipp whereas Cork struck for home confidently.

Two more points from Lehane had the one ahead before they struck what was ultimately the decisive blow of the game when substitute Michael Lehane raced onto a Darragh Fitzgibbon delivery and finished with aplomb.

Tipp fought to the death, but it was Cork who delivered the final fatal cuts with points from Luke O’Farrell and Seamus Harnedy that drew great, triumphant roars from their support.

The summer has just begun and it will be interesting to see where the Rebels go from here, but this game really felt like an important milestone for their developing, young team. As for Tipperary, they have a lot of soul-searching to do, but it would be very premature to write them off just yet.

Should Tipp have had a sweeper – No in the opinion of Jackie Tyrrell and Anthony Daly pic.twitter.com/vq1dG0gCow

Tickets will be on sale from 2pm today from ticket booths on approach to Semple Stadium Thurles.

Stiles will be open from 2pm, supporters are asked to arrive early to avoid delays.