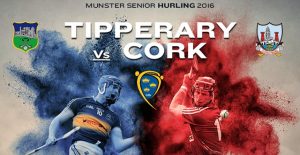 Tipperary defeated Cork by 0-22 to 0-13 in the Munster Senior Hurling Championship Quarter-Final on Sunday May 22nd at Semple Stadium Thurles.

It was Tipperary's day today as they hurdled the challange of Cork to advance to the Munster SHC Semi Final! pic.twitter.com/GmOwkVggo4

Report by John Fogarty from the Irish Examiner

Watched by a 29,114 crowd, Tipperary had too much class and intelligence for a limp Cork at a rain-drenched Semple Stadium this afternoon, writes John Fogarty. A Munster quarter-final to forget, Cork were 11 points down at one stage early in the second half before they staged an all-too-brief rally.

Tipperary managed to go 16 minutes without scoring the second half. It meant little even though Cork strung together four points in a row in that period. Tipperary hardly managed to get out of third gear but what they did was too good for Cork who suffered a systematic malfunction akin to what was seen here in last year’s All-Ireland quarter-final against Galway.

Goal chances were few and far between but there was enough quality from the Tipperary forwards on a day when the likes of Seamus Harnedy and Pa Horgan were reduced to relatively anonymous roles. Cork surprisingly chose to face the wind in the first half and soon found themselves in arrears as Tipperary negated Cork’s sweeper William Egan by splitting balls to the sidelines for their full-forward to chase.

Six yellow cards, three doubles, were shown in the opening period with Cathal Barrett and Bill Cooper fortunate not to pick up red cards for interfering with each other’s helmet. Barry Kelly also chose not to penalise John O’Dwyer for an off-the-ball incident involving Lorcán McLoughlin although O’Dwyer was later booked.

Through a barrage of heavy downfalls, it was Tipperary and O’Dwyer who looked so much sharper. Three beautiful points in the space of two minutes, the last of them coming courtesy of O’Dwyer from an acute angle, gave the home side a 0-7 to 0-1 lead after 16 minutes.

Cork threatened to steady themselves with a Horgan free and a Brian Lawton point from distance but Tipperary resumed normal service and hit four in a row to lead by 0-12 to 0-4. A Horgan free in the 33rd minute ended a 10-minute spell without a score for Cork but it was the brilliant O’Dwyer who finished out the half with a brace of points to hand Tipperary a 0-14 to 0-5 interval advantage.

Starting out in defence of their provincial title the Tipperary side to face Cork in the Munster Senior Hurling Championship Quarter-Final on Sunday next, May 22nd at 4pm in Semple Stadium has just been announced by manager Michael Ryan.

In his side, Michael has granted Championship debuts to four players as Tipperary’s journey in this seasons championship gets under way. Seamus Kennedy, Sean Curran, Dan McCormack and John McGrath all line out for their first taste of Senior Championship action in what will also be Michael Ryan’s first Championship match as manager.

The starting 15 lines out as follows –

The Cork team to play @TipperaryGAA next Sunday has been announcedhttps://t.co/XYvGI6N5sb

The Cork team to play Tipperary in the Munster Senior Hurling Championship next Sunday has been announced as follows.

TIPPERARY v CORK
It remains one of hurling’s biggest attractions, having delivered some remarkable contests in a rivalry which began in Buttevant on 27 May 1888. The intervening 128 years have seen the counties meet in 83
championship games, with Tipperary holding the tiniest advantage, having won 38 to Cork’s 37, with seven draws and one abandoned game.
Tipperary have beaten Cork in six of their last seven championship games since 2007 (the exception was 2010 when Cork easily won a Munster quarter-final clash before Tipperary recovered and won the All-Ireland title). Prior to 2007, Cork had won the previous five championship clashes with Tipperary.

MOST RECENT CHAMPIONSHIP GAME
Tipperary 2-18 Cork 1-11 (2014 All-Ireland semi-final, Croke Park) Cork, beaten All-Ireland finalists in 2013, won the 2014 Munster title but were well beaten by Tipperary in the All-Ireland semi-final.
Tipperary led by 1-7 to 0-8 at half-time and increased their advantage in the second-half to run out ten point winners. Seamus Callanan (2-4) and John O’Dwyer (0-6) provided 2-10 of Tipperary’s total.

DID YOU KNOW?
Cork’s last championship win over Tipperary in Semple Stadium was in 2006 when then won the Munster final by 2-14 to 1-14.

THE ROAD AHEAD
The winners will play Limerick in the Munster semi-final on June 19; the losers head for the qualifiers on July 2.

MANAGEMENT
Both are under new management with Michael Ryan (Tipperary) and Kieran Kingston (Cork) in their first season, having replaced Eamon O’Shea and Jimmy Barry-Murphy respectively.