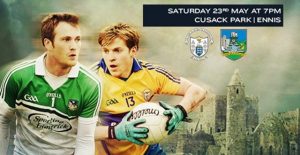 Clare defeated Limerick by 0-15 to 0-13 in the Munster Senior Football Championship Quarter-Final on Saturday May 23rd at Cusack Park Ennis.

Clare edged into a Munster Football Championship semi-final meeting with Cork next month after suffering a real scare against neighbours Limerick at Cusack Park.

The hosts looked to be cruising at half-time with a 0-9 to 0-4 lead until Limerick brought a real fight to the contest after the restart spearheaded by Ian Ryan and Peter Nash.

But two late scores from Clare substitute Cathal McInerney proved the difference to send his side into the last four and dispatch Limerick to the qualifiers.

Robert Browne got Limerick off the mark at the other end before Clare’s best goal chance of the half arrived when Shane Brennan’s low drive was well saved by Brian Scanlan.

Ian Ryan then gave Limerick the lead as Clare’s Eoin Cleary, Pádraic Collins and Shane Brennan were all guilty of kicking wides; but they got away with it as the Banner still managed five scores on the trot.

Eoin Cleary fisted over before Shane and Gary Brennan stretched Clare’s lead, with Limerick starting to give the ball away very cheaply.
Cathal O’Connor’s pointed 45 was followed by Pádraic Collins’ first point of the evening which received a huge roar from the Clare faithful inside Cusack Park.

Limerick finally ended a 20-minute scoring drought when goalkeeper Scanlon dispatched a free but Clare responded with three more unanswered points through Cleary and a double from skipper Brennan to bring his personal tally to 0-4.
Scanlan fired over a 45 for John Brudair’s charges in stoppage time at the end of the half to make it 0-9 to 0-4, with the hosts in firm control of the contest.

But Limerick greatly improved after the restart and despite falling six behind when Jamie Malone scored early on, they would manage to get within a point of their neighbours.

Peter Nash, Stephen Cahill, Ian Ryan and Iain Corbett and Cian Sheehan all contributed to Limerick’s fine revival as Clare were suddenly on the ropes and badly needed a score.

That score eventually came from Rory Donnelly before Ryan kept Limerick just a point behind once more, and David McInerney and Scanlan swapped scores from placed balls to set up a tense finish.

As Limerick fought bravely for a leveller, McInerney popped up again at the death to dispel any chances of a replay by firing over and dragging his side over the line and end a cracking second half of football.
***

The Limerick senior football manager John Brudair has named his team to start the Munster senior football championship match against Clare in Ennis on next Saturday 23rd at 7pm. Four players are making their Munster championship debut, Robert Browne at corner back, Cillian Fahy at centre back, Stephen Cahill at wing back and Peter Nash at corner forward.

This ticket includes admission to both the football and hurling fixtures, details below:

*This is an unreserved fixture

Please retain ticket for both fixtures, no re-prints

Clare and Limerick last met in the championship in 2012 when Clare won a Munster semi-final by a point. However, their most recent clash was in this season’s Allianz Football League when Limerick won by 2-10 to 1-5 in a Division 2 tie at Newcastlewest. It was level at 1-5 each early in the second half before Limerick took control to run out eight-point winners.

Both Clare and Limerick won three and lost four of their seven Division 3 League games this year.

Clare drew with Waterford in the Munster first round last year before winning the replay. They lost the semi-final to Kerry by 1-17 to 1-13 before beating Carlow (4-26 to 2-13) in the second round of the All-Ireland qualifiers. They lost the third round to Kildare by 0-13 to 0-12.

Next Saturday’s winners will play Cork in the Munster semi-final on June 14.