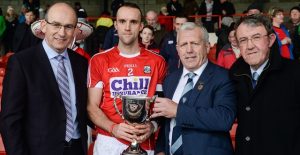 Cork defeated Limerick by 1-21 to 1-20 in the Co-Op Superstores.ie Munster Hurling League Final on Sunday January 29th at the Gaelic Grounds Limerick.

Limerick 1-20 Cork 1-21: Alan Cadogan, the form player on the form team in the Co-op superstores.ie Munster senior hurling league, struck for a late, late goal in a sodden Gaelic Grounds yesterday to earn Cork the first silverware of the season.

Cork were two points behind deep in injury-time when substitute Seamus Harnedy picked out the Douglas club man and Cadogan finished coolly from an acute angle.

There was still time for Limerick to hunt out an equaliser, but Cork held on for the win.

“When the referee said five minutes (injury-time) I always felt we had a chance,” said Cork manager Kieran Kingston afterwards.

“It was exciting mainly because of the score, to be fair. The scoreline was up and down towards the end and it was anyone’s game up to the end.

“It was played with a lot of effort and work-rate, which you’d expect in a final. We were happy with that, tough conditions, it’s only January so it’s early days. For those that were there, it was exciting towards the end.”

The 2,372 on hand saw Cork go 0-3 to 0-1 up before Limerick goaled on eight minutes, a super James Ryan pass picking out David Dempsey, who finished well from close range.

The goal opened the game up, with the sides swapping points in slippery conditions, Limerick nudging ahead with a Barry Nash point at the end of the first quarter, 1-5 to 0-7.

The impressive Peter Casey hit four points on the spin and pushed Limerick two ahead; Patrick Horgan’s accuracy from frees tied the game for Cork, but there was still time for Graeme Mulcahy and Kyle Hayes to push Limerick two ahead at the break, 1-11 to 0-12.

On the resumption, Limerick were sharper, pushing three ahead by the 45th minute thanks to another Casey free — a good Nickey Quaid save denied Darragh Fitzgibbon a Cork goal just afterwards.

Dempsey gave Limerick a four-point lead turning into the final quarter but Horgan (two), Kingston, sub Seamus Harnedy, and Daniel Kearney put Cork ahead with five points in a row.

Limerick rallied, however. Points from Casey, Dempsey, and Byrnes (free) seemed to make it safe — until Cadogan’s late intervention.

John Kiely was frank at the final whistle. “I think we sucker-punched ourselves to be honest,” said the Limerick boss.

“We had plenty of chances to put the game into a safer position, we should’ve had a four or five-point lead and it was our own doing that we didn’t have ourselves in a better position. We left ourselves vulnerable to that goal.

“He (Cadogan) was under a lot of pressure, boys tried their best but he got it off, it’s more about the performance than the result.

“It would’ve been nice to win it, of course it would, but I’m very happy with the performance, I think we progressed quite a bit over the course of the last month.

“We controlled the game for large periods, we were very solid, we didn’t have a lot of options on the bench because we played a game yesterday with the rest of the panel so that left us a bit shy.

“On another day we would’ve had fresher legs to come in but I’m not making any excuses.”

For Cork, there was encouragement from the result and from the survival of newcomers such as David Griffin and Killian Burke in a full-back line which had to be reconfigured due to injury at half-time, while a first sighting of Seamus Harnedy in good form will also encourage the Leesiders.

This was a fairer reflection of Limerick’s quality after the seven-goal drubbing at Cork’s hands in the league proper. In Diarmaid Byrnes they have a long-range free-taker of real quality and Peter Casey was dangerous all through.

A decent warm-up for the league in a fortnight’s time? Absolutely. If February’s fare is as entertaining as yesterday there’ll be no complaints.

Defeat for the Limerick hurlers today but David Dempsey impressed with a return of 1-3 https://t.co/IdUfpCJXNH @NapGAA pic.twitter.com/m17caK8Bbu

The Cork Senior Hurling team to play Limerick on Sunday 29th January at 2pm in the Co-op Superstores.ie Munster Hurling League Final @ Gaelic Grounds has been announced as follows.