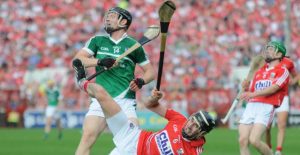 Cork won a first Munster SHC title since 2006 as second-half goals from Séamus Harnedy and Paudie O’Sullivan gave them victory over Limerick in the last provincial final to be played at Páirc Uí Chaoimh before its redevelopment.

In a game which was level on eight occasions, six times in the second half, goals were always going to be crucial and so it proved, as the Rebels reversed the outcome of last year’s decider in the Gaelic Grounds. Despite two early misses from placed balls from Shane Dowling, Limerick settled the better, with points from Dowling, James Ryan and Graeme Mulcahy the only scores of the game’s opening 10 minutes as Cork laboured.

While Aidan Walsh opened the hosts’ account with a smart score after latching onto a break, Limerick remained on top and by the 21st minute it was 0-8 to 0-4 for the visitors. Captain Donal O’Grady and Dowling were impressing for them while at the other end Richie McCarthy had to make a great intervention to stop Conor Lehane getting on a Mark Ellis ball.

Lehane was one of the brighter spots in the Cork attack, and he was central to an unanswered seven-point burst as Cork forged ahead for the first time, with Patrick Horgan’s frees also crucial in this period and Alan Cadogan also getting a smart point. In the midst of that flurry though, Cork had reason to be thankful to Shane O’Neill for an outstanding block on a Dowling shot after James Ryan’s ball in. In keeping with the frenetic nature of the game, however, Limerick were level at half-time at 0-12 each as Paudie O’Brien, Mulcahy, Paul Browne and Dowling all pointed with Lehane getting Cork’s only response.

The opening stages of the second were of a similar vein as the sides were level at 0-13, 0-14, 0-16, 0-17 and 0-18 each, with Limerick’s opening of a two-point lead quickly eradicated. Dowling and Lehane remained to the fore for their respective sides during this period before the game turned in the 54th minute.

With the sides tied, Browne looked to have put Limerick ahead only for his shot to be waved wide and, with the very next attack, Cork had a goal as the Limerick defence opened up, allowing Harnedy to fire past Nickie Quaid from close range. Limerick centre-back Wayne McNamara replied with a booming effort and after Horgan scored from the resultant puck-out it took another brilliant defensive flick by O’Neill to stop Browne manoeuvring himself into a goalscoring position.

Bill Cooper profited from the Cork attack that developed after that to put four between the sides, but two from Dowling – one a free – left two in it with eight minutes of normal time left. Harnedy’s second point answered that and then Cork assured themselves of the win as Daniel Kearney dispossessed Séamus Hickey before sending the ball into half-time sub O’Sullivan, who finished with aplomb.
***
Scorers for Cork: P Horgan 0-8 (0-6f), C Lehane 0-5, S Harnedy 1-2, P O’Sullivan 1-1, A Cadogan 0-3, B Cooper, A Walsh 0-2 each, A Nash 0-1f.

This is the last Munster Senior Hurling Final in Páirc Uí Chaoimh before it is rebuilt – the first was on  August 1st 1976 also between Cork and Limerick. Cork won by 3-15 to 4-5.

It’s 8 years since Cork won the Munster championship – the longest gap since the 10 year period between their 1956 and 66 wins.

Until last year, Limerick had won only 1 of their previous 17 Munster Senior Hurling Championship matches, a victory over Tipperary in the 2007 Munster Semi-Final 2nd replay at Pairc na nGael. During that period, Limerick drew 5 times. Until this year’s victory over Tipperary at Semple Stadium, Limerick’s last Championship victory away from Pairc na nGael came in 2001 with victories over Cork and Waterford at Pairc Ui Chaoimh.

With Limerick’s victory last year, Clare are the only one of the 5 participating counties not to have won the Munster SH Championship since the turn of the millennium.

Declan Hannon of Limerick was the top scorer in last year’s Munster championship with 0-17 from 2 games. Patrick Horgan of Cork was second in the list with 0-12 from 2 games. Patrick Horgan has already scored 2-33 from 3 games in this year’s championship and is the current top scorer with a lead of a whopping 2-17 over nearest challenger Pauric Mahony (Waterford). Although Horgan amassed this in three games compared to 1 or 2 for other counties, it’s still an awesome tally with an average score of 0-13 per game.

Waterford scored 0-14 against Cork in their quarter final replay – it was the lowest score by a team in the Munster SHC since 2010 when Tipperary recorded 0-14 in also losing a quarter-final to Cork. Tipperary of course went on to win the All Ireland final later that year.

Clare played 8 championship games to win last year’s All Ireland title. Kilkenny played 6 to win the 2012 title and 4 to win the 2011 title.

Brian Gavin (Offaly) will referee his third Munster senior hurling final on Sunday – he previously took charge of the 2010 replay and the 2011 final.

Remember that Munster Hurling Final of 1976? Here's a quick reminder from our friends at @RTEArchives https://t.co/8CHCoaTuZ3 #GAAGO

The problems encountered earlier today purchasing tickets for the Munster hurling final online and through Centra and Supervalu outlets occurred due to a technical issue with the GAA’s ticket partner, tickets.ie.

Tickets.ie have made the following statement on the matter:

“Tickets.ie regrets and apologises for any inconvenience caused to Munster GAA customers who were delayed in purchasing tickets for the Munster GAA Hurling Final either online or from designated retail outlets this morning.

Tickets remain available for all other GAA fixtures this weekend from tickets.ie and retail outlets.”

Munster GAA also regrets very much the inconvenience to patrons as a result of these problems and would like to apologise to all who experienced difficulties purchasing tickets.

CAPACITY INCREASED TO 36,646
The capacity of Páirc Uí Chaoimh for Sunday’s Munster hurling finals has been finalised at 36,646.

This has been approved following completion of works at the grounds, undertakings to complete further works before Sunday, a review of last Sunday’s operations at the Munster football final and consideration of all relevant factors with a particular emphasis on Health and Safety requirements.

ADDITIONAL TICKETS
As a result of the increase in capacity, additional tickets will be made available to the participating counties and for public sale.

ROUTE COLOURS TO ACCESS STADIUM
All tickets for Sunday’s games will indicate a particular route colour which patrons should follow to gain access to the Stadium. We ask all patrons to follow the route colour and the directions of stewards both outside and inside the stadium. All plans for stewarding and access are designed in the interests of patrons’ enjoyment and safety.

ENGAGEMENT OF PROFESSIONAL SECURITY FIRM
There has been extensive commentary in the media since the Munster football finals in relation to the engagement of a professional security firm at Páirc Uí Chaoimh last Sunday. The professional security firm was engaged on foot of a recommendation by the GAA’s Health and Safety advisors and was geared towards ensuring that the safe capacity could be increased for next Sunday’s hurling finals.

Discussions have been on-going since mid-June between the Munster Council, the Cork County Board and the GAA’s Health and Safety advisors regarding the safe capacity at Pairc Ui Chaoimh for the Munster Football and Hurling Finals. Following a site visit to Páirc Uí Chaoimh on June 18th, where meetings took place between representatives of the Health and Safety advisors, stadium management, the stadium Consulting Engineers and Munster Council, a report was furnished to all parties by the Health and Safety Advisors outlining a series of necessary works required for health and safety reasons, including the installation of temporary concourse areas and temporary stiles.

This report added that;

“In addition to normal complement of voluntary stewards, a professional security firm with competence and experience in crowd management at GAA stadia is to be appointed to provide sufficient complement of personnel to manage:
a) crowd flows in each of the tunnels and to and from the outer temporary concourse areas
b) filling of the terraces and crowd movement on the terraces during the event”

Furthermore, the report stated that “the foregoing temporary works and crowd management arrangements are to be fully completed and in place for the Munster Football Final on 6th of July, 2014”. It concluded by saying that following a review of the operation of the Munster Football Final, the capacity of the stadium would be reviewed for the hurling final. The review of the operation of the Football Final is now complete with the announcement of the increase in the safe capacity.

The Munster Council implemented the recommendations of the report in full, including the hiring of the security firm which has the relevant competence and experience in crowd management at GAA stadia.

The Munster Council acknowledges and appreciates the role of voluntary stewards at all its games but equally has an obligation to act on any recommendations to comply with Health and Safety requirements.

The Munster Council wishes all the participating counties well for Sunday’s senior and minor hurling finals and hopes that all patrons have an enjoyable visit to Páirc Uí Chaoimh.

Tickets are being distributed through the normal GAA units of the County Boards & Clubs.