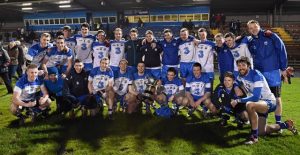 Waterford defeated UCC by 3-12 to 1-9 in the McGrath Cup Final on Saturday January 24th at Fraher Field Dungarvan.

McGlinchey named the same starting fifteen that nosed past Cork last Sunday. They built up a 2-6 to 1-7 lead at half time following a fast and furious opening period. Waterford made the perfect start when Joey Veale slotted home after Liam Lawlor’s point effort dropped around the goalmouth.

The students, minus several first choice players, gave the Déise persistent headaches at the back and posted four unanswered points through Conor Horgan, Adrian Spillane, David Harrington and Kevin Davis. Although the hosts got their noses back in front, Horgan pounced for a goal on 18 minutes when Stephen Enright saved Tom Hickey’s close range blast (1-4 to 1-2).

Waterford regained the lead when centre back Maurice O’Gorman made a rare foray into enemy territory and fired a low shot under Pádraig McCarthy. Liam Lawlor and Patrick Hurney extended the margin out to four before a pair of Tom Hickey points left UCC two down at the interval.

Match Report on the Waterford GAA Website! Thanks to @alltheyoungblue http://t.co/ar33TZyKYL

When – Saturday January 24th at 6pm

Waterford Senior Football team to play UCC in the McGrath Cup final on Saturday evening next at 6.00pm in Fraher Field.

The last time a college reached the final was in 2010 when UCC also qualified. On that occasion they lost to Kerry by 1-11 to 0-9.

The last McGrath Cup Final which did not involve Cork or Kerry was in 2008 when Clare defeated Limerick by 1-6 to 0-8. Neither Cork or Kerry took part in the competition that year. The last McGrath Cup in which Cork and Kerry were both defeated in the early stages of the competition was in 2005. On that occasion, Tipperary accounted for Kerry in the Quarter-Final by 1-10 to 0-8 while Cork lost out in the semi-final to Limerick by 2-3 to 0-7. The 2005 McGrath Cup was won by Limerick following a 2-10 to 1-3 victory over the Cork Institute of Technology in the final.

Visit the Munster GAA web site History section to view the complete Roll of Honour since the competition began in 1981 – https://munster.gaa.ie/history/mcgrath-cup-football/

Presented by Joe McGrath on June 21st, 1981 for the promotion of Senior Football in Munster.