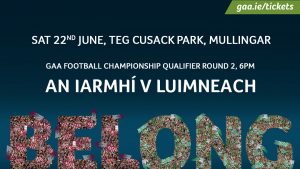 Westmeath defeated Limerick by 2-13 to 1-10 in the GAA Football All-Ireland Senior Championship Round 2 on Saturday June 22nd at TEG Cusack Park, Mullingar.

REPORT: @westmeath_gaa had to work hard to beat @LimerickCLG in Round 2 of the All-Ireland SFC.

Report By Conor McKenna at TEG Cusack Park for GAA.ie

Westmeath advanced to round three of the football qualifiers after a six point victory over Limerick.

The home side found the net just before half time and just after half time and those two goals proved crucial in determining the outcome of the game.

Limerick were not bad at all and the six point winning margin slightly flattered the hosts, as the visitors looked organised in defence and they certainly did not look like a side that finished in the bottom half of Division four.

Westmeath have picked up two victories in their two qualifier games against Waterford and Limerick respectively and Jack Cooney will be very pleased with his sides response after losing to Laois in the Leinster Championship.

It was the home side who opened the scoring courtesy of a point from Tommy McDaniel, before Limerick defender Gordon Brown levelled proceedings.

Ian Corbett and Kieran Martin then traded scores, before Westmeath talisman Ger Egan added two points to give his side a slender lead, with ten minutes played.

It was tit for tat up until the end of the half, as Westmeath held a three point advantage heading into injury time, but Jack Cooney’s side registered 1-1 in succession just before the interval, with Callum McCormack’s point followed up with a goal from James Dolan, as Westmeath held a 1-9 to 0-5 lead at half-time.

Limerick needed a good start to the second half, which was not forthcoming, as Westmeath registered their second goal just after half-time, with Joe Halligan finding the target, after being set up by Ronan Wallace.

Westmeath were ten points up at this juncture, but Limerick added the next three points in succession to reduce the gap to seven.

Two quickfire points from Egan and McCormack halted Limerick’s momentum, but Darragh Treacy found the net for Billy Lee’s side, with the midfielder’s 53rd minute strike reducing the gap to six.

Limerick added the next two points to further reduce the deficit and momentum was with Billy Lee’s side at this stage of the game, as Westmeath looked rattled.

Substitute John Heslin registered a point to settle the hosts, before a free from Ger Egan sealed the victory, as Jack Cooney’s charges held on for a six point win.

The Limerick senior football team vs Westmeath this Saturday 22nd June has been released. The game throws in, in Mullingar at 6:00pm. Very Best of Luck to all players and Management #LuimneachAbú pic.twitter.com/EvEiOzDDpC