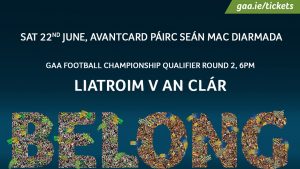 REPORT: A dominant first-half performance laid the foundation for @GaaClare's victory over @LeitrimGAA in Round 2 of the All-Ireland SFC.

All-Ireland SFC: Clare have too much for Leitrim

Report By Daragh Small for GAA.ie

Éimhín Courtney came off the bench to fire a third goal as Clare went to Carrick-on-Shannon and dumped Leitrim out of the All-Ireland Senior Football Championship.

Leitrim have never won back-to-back qualifiers and on a day where their hurlers claimed Lory Meagher Cup glory in Croke Park, they couldn’t do likewise in Páirc Seán Mac Diarmada.

Goals from Jamie Malone and Gary Brennan killed the game off before half-time, and there was no way back afterwards with Courtney’s effort adding the finishing touches.

This Round 2 qualifier was played in ideal conditions for football, and Clare were ruthless in the first half, although they could have led by even more than the 2-12 to 0-6 half-time scoreline.

The game turned in the 14th minute when Clare finally found the net after threatening on multiple occasions prior to that.

Malone scored the first goal and when Brennan finished into an open-goal in eight minutes later Clare were 2-8 to 0-2 in front and the game already looked over as a contest.

Eoin Cleary and Domhnaill Flynn missed early frees for their respective frees but Malone tapped over a second-minute point, before Cleary and Brennnan added to the lead.

Leitrim captain Micheal McWeeney blocked a goalbound effort from Seán O’Donoghue in the ninth minute, and although Leitrim looked shaky at the back they fought their way back into the match.

Flynn scored their first point in the 12th minute and Dean McGovern reduced the arrears to the minimum moments later. But Cleary hit back for Clare and that was the start of a magnificent 2-5 blitz.

Malone was calm enough to round Leitrim goalkeeper Cathal McCrann and side-foot home a crucial goal. Brennan and David Tubridy (three) scored points and then Cleary’s attempted point dropped short and Brennan had the easiest finish.

Flynn scored Leitrim’s third point in the 23rd minute but that was quickly cancelled out by Cleary up the other end.

Flynn and substitute Evan Sweeney tried to mount a comeback for Leitrim but Clare scored three of the remaining four points before half-time. Cleary’s fifth point of the day gave Clare a massive 12-point interval lead.

Sweeney scored the first point of the second half from a free but every time Leitrim built up some momentum they conceded a score, Cleary added his sixth point.

Shane Moran did score two fine points but Clare were never going to be caught and Courtney scored a killer third goal after a powerful run by Kieran Malone in the 55th minute.

Sweeney continued to fire scores but Clare turned their attentions to Round 3 while their opponents added a gloss to the final scoreline.