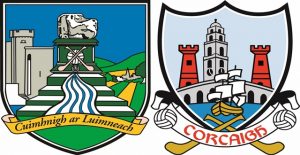 Limerick defeated Cork by 0-23 to 2-15 in the Electric Ireland Munster Minor Hurling Championship Semi-Final on Thursday June 26th at the Gaelic Grounds Limerick.

Limerick remain on course to retain their Munster MHC title after this two-point win over Cork at the Gaelic Grounds last night. But it was close, very close. On the back of a powerful second half the champions built a comfortable five-point lead on Cork (0-23 to 1-15) as the game went into injury-time. But a cracking Cork goal by Dayne Lee, after a good run and pass by Luke Meade, took the wind out of Limerick sails and the final dramatic three minutes were played out almost entirely in the Limerick half, much of that in and around the red zone.

With time almost up Cork won a free just outside the 20m line and keeper and captain Patrick Collins — who plays outfield for his club, Ballinhassig — was called forward to do the honours. Patrick made good contact but his counterpart in the Limerick goal, Eoghan McNamara, was equal to it and deflected the shot out for a 65. Midfielder Daniel Meaney took the 65, dropped the ball short, but the danger was cleared, the final whistle sounded and Limerick could celebrate.

In truth, and even allowing for an earlier penalty save by McNamara from Cork centre-back Alan O’Callaghan (40m), had Cork goaled in those final minutes it would have been grand theft because, overall, Limerick were the better side. Cork were game, they were gallant, and in Sean Hayes/Kingston/Lee they had a fine half-forward line. Overall, however, Limerick were more balanced and with Paddy O’Loughlin and Ronan Lynch anchoring the defence, the sublime Cian Lynch orchestrating matters in midfield, they had far more options up front, far more threat. It took until the second half for that threat to really manifest itself but when it did, they did look the part.

The first half was marred by injury to two Cork players, corner-back Shane O’Brien (8m) and roving corner-forward Darren Casey (22m), both entailing lengthy stoppages as the players were attended to on the pitch. It meant nine minutes of injury-time in which we saw probably more action than the almost the rest of the half. It also meant Cork manager Denis Ring and his selectors were forced into early changes, which didn’t help their cause.

Nonetheless, Cork were level at the break, 0-11 to 1-8, their goal coming in the third minute of the nine added on, the powerful Kingston doubling on a perfect pass from the soaring Hayes. That score put Cork a goal ahead (1-7 to 0-7) and Dayne Lee extended that lead with a fine point a couple of minutes later.

The final minutes of the half, however, were dominated by Limerick, four points on the trot, sweet-striking free-taker Colin Ryan with three of those, leaving it level. Limerick continued their dominance on the resumption, added five points (the ever-dangerous Tom Morrissey with a hat-trick) to make it nine on the trot and see them take a grip on this game.

Cork did settle, eventually, and from there to the end of normal time matched Limerick point for point; Kingston (three), Hayes (two) doing most of their scoring, while Ryan, Peter Casey and Ronan Lynch each had a brace for Limerick. The visitors also had chances, not least that saved penalty, but still, that five-point difference as the game entered injury-time looked just about right. Then came that Lee goal, that late drama.Fair result, but fair play to Cork also, they came to party and did make a fight of it.

Dayne Lee’s smashing goal for Cork in the 60th minute brought them right back into this game, made it a final few nail-biting minutes for the Limerick supporters.

Talk of the town:

How poor the touch of so many on both sides, many of whom finished their Leaving Cert exams only a few days ago. Surely another week could have been found?

Did that just happen?

Early in the game, Cork corner-forward Shane O’Brien down injured, both managers called their teams together for a mid-game huddle.

Cork played all their cards in the 60 minutes, used all five subs, but none made a major impact; Limerick’s Robbie Hanley meanwhile did look good.

The man in black:

Paul Foley (Waterford) had no impact on the outcome but missed a few calls, should have allowed advantage to Tom Morrissey (Limerick) when a goal was on in the first half.

Munster final for Limerick v Waterford on July 13th in Cork, double-header with their seniors; end of the road for Cork.

Munster minor hurling champions Limerick set up a repeat of the 2013 provincial decider by defeating Cork at the Gaelic Grounds on Thursday evening.
The Treaty County needed a replay to see off Waterford in last year’s final, and they will face the Déise again on July 13 as they bid to become the first side ever from the county to retain the Munster MHC title. The first half of Thursday’s game was a very even contest, but Limerick gradually took control after the interval, and although Cork never let them get too far ahead, there was an element of control about the Limerick victory.

The first half finished level – 0-11 to 1-8 – with Cork having found the net in first half stoppage time when Shane Kingston fired home. That score put the visitors 1-7 to 0-7 ahead, and a Dayne Lee point extended the lead to four, but Limerick finished the half with points from the outstanding Tom Morrissey and Colin Ryan (3 frees) to go in level.

Morrissey was having a super game, and he fired over three points in quick succession after the restart, alongside a Cian Lynch score, to leave Limerick 0-15 to 1-8 ahead, and to make it eight points without reply as the champions began to assert themselves. When Conor Fitzgerald fired over to put Limerick five ahead, Cork looked to be flagging, but they had a chance to get back into the game from the penalty spot on 39 minutes.
Alan O’Callaghan’s shot was saved by Eoghan McNamara though, and Limerick pressed on. Points from Kingston and Seán Hayes got the lead down to three for the final 10 minutes, but with Ronan Lynch on song from placed balls, Limerick remained in firm control as time ticked on.

Kingston fired a goal to the net for Cork just as the game entered stoppage time, and the Rebels actually had a chance to win it from a late free from 25 metres. It was deflected wide though, and Limerick hung on for victory.

Next Round – the winners will qualify for the Munster final on Sunday July 13th against Clare or Waterford.

Limerick minor hurling management of Brian Ryan, Eamonn Cregan, Stephen McDonogh and Jerry Wallace has announced their match panel of 24 for their Munster semi final meeting with Cork at the Gaelic Grounds on this Thursday evening.

The Cork Minor Hurling team to play Limerick in the Munster Minor Hurling Championship Semi-Final on Thursday night at 7.30pm at the Gaelic Grounds will line out as follows:

Denis Ring and his selectors have opted to make three changes following the quarter-final victory over Kerry. Ollie Dempsey, Darren Casey and Shane Kingston come into the side in place of Eddie Gunning, Tomás O’Connor and Mark Dolan.

Cork last appeared in a Munster Minor Hurling final in 2008 when they won the title by defeating Tipperary by 0-19 to 0-18.

1989 was the last time Limerick qualified for 2 consecutive Munster finals.

Waterford and Clare last met at Fraher Field in the 2013 Munster minor hurling championship when Waterford secured a 4-18 to 1-10 victory in a semi-final play-off game.