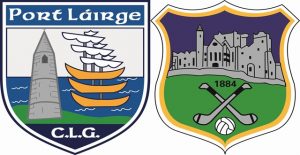 Job done for Tipperary at Semple Stadium last evening as Charlie McGeever’s hosts blew away Waterford to book their place in the Electric Ireland Munster MFC semi-finals. For Tipp, it’s a last four clash with a playoff winner on May 13 as Waterford attempt to regroup for a knockout fixture with Limerick next week. But Waterford will feel they have something to work on after posing some problems for Tipp in the first-half.

In front of over 600 spectators, the visiting Déise found themselves 0-1 to 0-5 behind midway through the first half but were ahead after scoring 1-2 in four minutes. Goal chances were missed at either end before a slow burner burst into life in the final ten minutes of the first-half. Tipp dual star Stephen Quirke, the county’s minor hurling captain, and Jack Kennedy had been calling the tune for the winners before Conor Murray flashed life into Waterford.

Murray had bagged a couple of points before setting up Shane O’Meara for a 26th minute goal. Tipp’s response was good, however, as Kennedy scored two points before another dual player, Tommy Nolan, added another in first-half stoppage time. Tipp were 0-8 to 1-3 clear at half-time before Sean White notched Waterford’s only point from play of the second-half on the resumption. That was the cue for Tipp to gain control as they hit 1-5 without reply to end this as a contest.

Delahunty scored the 35th minute goal, pouncing on Waterford goalkeeper Kevin Dwane’s error.With the sun beaming from the Killinan End into his eyes, Dwane failed to deal with Kennedy’s pointed effort that dropped short. Delahunty was in no mood for charity and fisted home to hand Tipp a 1-11 to 1-4 advantage.

A second goal arrived 10 minutes later and this time Dwane had no chance as sub Brendan Martin coolly slotted beneath his body from Shane Power’s pass. That was pretty much that as Tipperary kept the scoreboard ticking over until the finish, with Kennedy, Martin and Ross Peters adding further points. Sean White kept the Waterford flag flying with a couple of placed balls interrupting Tipp’s scoring runs but this was too easy for the home side, who are rated as a team to watch in this year’s championship.

The obvious reward for Tipp’s victory is the avoidance of both Cork and Kerry until a potential Munster final. There is some obvious talent in the Tipp ranks, with Quirke and Kennedy shining like beacons and, having contested three successive provincial deciders from 2011-13, the chances are that Tipp will contest a second Munster final under McGeever’s watch.

The Tipperary minor football team to play Waterford in the Electric Ireland Munster Minor Football Championship Quarter Final in Semple Stadium on Wednesday night at 7pm has been announced.
Danny Owens captains the side making it a memorable double for his Moyle Rovers Club as his team mate & club colleague Stephen Quirke captained the Tipperary minor hurlers last week, with Emmett Moloney of Drom & Inch the other dual player.
In all 6 of last years starting 15 in the Munster Semi -Final line out again in Charlie McGeever’s side as they get their campaign under way.

When – Wednesday April 15th at 7pm

Next Round – the winners play the winners of the second play-off game in the in the semi-final on May 13th. The losers will play the losers of Cork v Limerick in the first Play-Off game on Wednesday April 22nd.