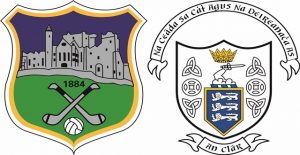 Clare defeated Tipperary by 1-10 to 0-6 in Round 2 of the Electric Ireland Munster Minor Football Championship Phase 1 on Wednesday April 17th at Cusack Park Ennis.

Report by Páraic McMahon for the Irish Examiner newspaper

It is expected that these sides will meet again before the championship is out should Tipperary overcome Limerick in their final round-robin meeting, so it comes as no great shock that this 60 minutes resembled a game of cat and mouse, with neither side keen to go at full tilt.

On the back of scoring 3-15 and 4-13, respectively, Clare and Tipperary were at least expected to keep the scoreboard ticking in this contest, but Seamus Mulvihill’s umpires had little stretching to do when it came to reaching for flags of either colour.

A brilliant Ben Comerford run set up Kyle Shelly for the first score of the evening, 20 minutes in. Shelly was fouled minutes later by Micheal Garry, with the resulting free calmly slotted over by Thurles Sarsfields’ Paddy Creedon. The subsequent restart was won by the Tipp attack, with the menacing Liam McCormack offloading to Creedon who doubled his tally.

Clare’s first score, an Eoin Talty goal, came courtesy of a misplaced Tipperary kickout, which ended up in the hands of danger man Shane Meehan, who ducked and dodged past oncoming defenders before offloading to Talty, who fired past James Griffin. White flags from Meehan and Conor Hassett would see Dermot Coughlan’s side surprisingly lead by two points at the break.

Having had to wait 20 minutes for a score in the first half, the 1,268 strong attendance had no such complaints in the second, as Creedon was on target 20 seconds into the restart. Clare improved as the game developed, dominating the second half and outscoring their opponents eight points to three. Captain Shane Meehan was the common denominator for the increase in Banner scores for the second half. As the mastermind behind several moves, he would finish the hour with five points to his name. Kyle Shelly fired over the final score from the Premier County on 55 minutes in what was a below-par outing from the visitors.

If this wasn’t an example of shadow boxing, Kerry will be licking their lips as their attempt to win seven provincial titles in succession will be much easier.

Meehan was the maestro for the winners and was ably assisted by Michael Garry, Brendan Rouine and Ciaran McMahon. For Tipperary, Christy McDonagh impressed, along with Paddy Creedon, Ben Comeford and the ever-troubling Kyle Shelly.

Both sides are back in action next week, with Clare already guaranteed a place in the phase-one final on May 7, but Tipp will have it all to do when they host Limerick.

The Clate Minor Football team for Wednesday evening’s game against Tipperary in Cusack Park has been announced https://t.co/PlPHkA7s5S

The Tipperary team to play Clare in the Electric Ireland Munster Minor Football Championship Phase 1 Round 2 fixture in Cusack Park, Ennis this Wednesday evening, April 17th at 6:45pm has been announced by manager Matt O’Doherty and lines out as follows;