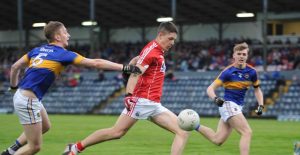 Cork defeated Tipperary by 1-14 to 1-11 in the first round of the Electric Ireland Munster Minor Football Championship on Wednesday April 13th at Pairc Ui Rinn.

Report from the Irish Times newspaper

Cork advanced to the Munster Minor Football Championship semi-final by defeating Tipperary for the first time in four attempts at Pairc Ui Rinn on Wednesday evening.

The sides were level at 1-11 apiece with 10 minutes to go, but Cork’s dynamic inside line conjured up with three points to run out worthy winners. In the first-half Cork started brightly and were 1-4 to 0-1 in front before Tipperary finally settled. They were boosted by a fifth minute goal from centre-forward Colm O’Callaghan who found himself in space and finished impressively with a low, hard shot to the corner of the net.

Right corner-forward Damien Gore formed part of a dangerous inside line and kicked three points, two from frees, with Mark Buckley in the other corner also getting on the mark. Tipp midfielders Ben Hyland and Conor Cashman broke Cork’s early dominance as the visitors kicked four points without response to be well in the contest approaching the interval.

Hyland’s influence was reflected in his three points with Daire Egan finding the range, too, as Cork went 15 minutes without a score until full-forward Kevin O’Donovan obliged, the home side 1-6 to 0-6 ahead at the break. Cork increased their lead to seven points on the resumption before Conor Cashman palmed in Tipp’s goal after 37 minutes to start the fight back only for Cork to finish strongly.

Ticket Information
Adult: €10.00
Juvenile (Under 16 Years of Age): Free of Charge
Concessions: a rebate of €5 is available on full-price Adult tickets on match day at designated stiles with valid ID

The Tipperary team to play Cork in the Electric Ireland Munster Minor Football Quarter-Final on this Wednesday night, April 13th in Pairc Uí Rinn at 7pm has been announced by manager Mike O’Sullivan and lines out as follows;

The Cork team to play Tipperary in the Munster Minor Football Championship next Wednesday has been announcedhttps://t.co/wuNlagh32w 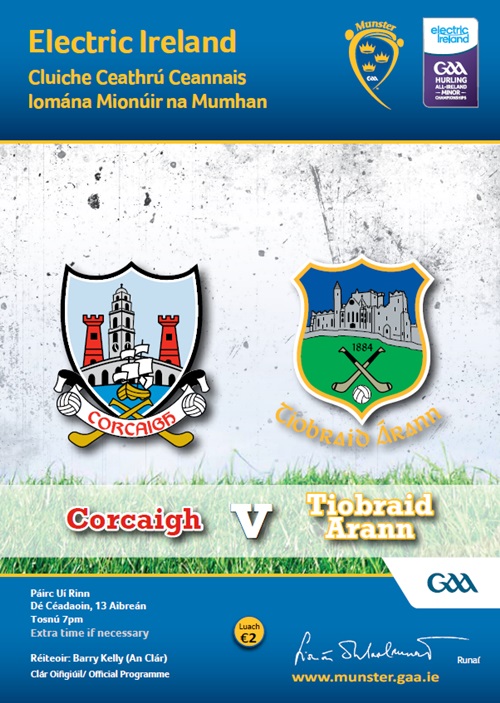