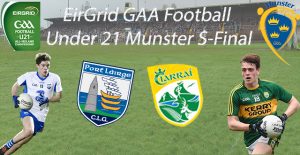 Kerry defeated Waterford by 1-18 to 0-7 in the Eirgrid Munster Under 21 Football Championship Semi-Final on Wednesday March 15th at Fraher Field Dungarvan.

Kerry 1-18 Waterford 0-7: That his charges never went beyond second gear didn’t bother Jack O’Connor. The Kerry U21s travelled to Dungarvan to do a job and did it with the minimum of fuss. Statements of intent can wait for Páirc Uí Rinn in two weeks.

Within 20 seconds of the start of yesterday evening’s Munster U21 semi-final, the visiting attack had prised open Waterford for what would prove the first of many goal chances. Lee O’Donoghue put Cathal Bambury inside the cover and, but for the intervention of the right post, Kerry would have been on their way to the significant victory that had been widely forecast before throw-in.

Mind you, they didn’t have long to wait to assert their dominance on the scoreboard. Killian Spillane, Andrew Barry, and Cathal Bambury had them three clear by the fourth minute. Bambury, Sean O’Shea, and Matthew O’Flaherty doubled that advantage by the 10th.

Leaving aside Kerry’s obvious superiority, the home side came across as disjointed. It was almost as if they hadn’t played together before. They hadn’t, in fact. In advance of this fixture, the squad had assembled for just two training sessions.

They might have matched Kerry score for score in the second period, but given the difference was 14 points at the break, the events of the second half were largely redundant. Little wonder Kerry boss O’Connor wasn’t getting too worked up about his side easing off after the restart.

“I know we didn’t set the world alight or give ourselves 10 out of 10, but we just needed to come down and do a job as good as we could. We did that,” remarked O’Connor.

“We had six changes made in the second half and we were maybe a little disjointed when they got their few scores. The name of the game, though, was getting out of here with a result.”

Killian Spillane, who finished as Kerry’s top scorer with 1-6, supplied the game’s sole goal six minutes from half-time. The lively Sean O’Shea created the chance with a searing run and all that was required of the Templenoe youngster was to palm the ball past Déise keeper Kevin Dwane.

Waterford, 1-12 to 0-1 in arrears at the break, had David Looby to thank for getting them on the board. His 12th-minute point arrived via the dead ball, as did his and Waterford’s second on 33 minutes. Not until Conor Gleeson burst past four green and gold jerseys in the 40th minute did Waterford have a score from play to their name. They’d kick four without reply between the 45th and 56th minute, which was mere damage limitation.

Both sides had been reduced to 14 men by this juncture. Cormac Coffey picked up a second yellow card for a high tackle on 42 minutes. Waterford’s numerical advantage didn’t last long, as Cormac Curran was sent to the line on a straight red card following an off-the-ball incident with Andrew Barry.

Brian O’Beaglaoich, who hadn’t been seen in the green and gold since the McGrath Cup win over Cork on January 15, got a quarter of an hour under his belt and management will be keen for him to start in the decider in a fortnight.

“It was good to see Brian getting a run,” said O’Connor. “He has had a frustrating time with that injury.

“It is a long time since Kerry beat Cork in Cork in this grade. I remember I was involved in 1997. We went over to Cork, David Moloney saved a last-minute penalty and we beat them by two points. I can’t remember if we beat them up there since. It is a tough place to go. I think it is the challenge we need.”

Who will contest the 2017 EirGrid Munster Under 21 Football Final on March 29th?

The Kerry Under 21 Football Team to play Waterford in the Munster Championship Semi Final on Wednesday night…. https://t.co/Q8RWbdg6ke

The Kerry Under 21 Football Team to play Waterford in the Munster Championship Semi Final at Fraher Field Dungarvan on Wednesday evening @ 7:30pm is unchanged from the side that defeated Clare in the Qtr Final last week.

The team, captained by Brian Sugrue of Renard is as follows:

The Waterford Under 21 Football Team to face Kerry on Wednesday night in Fraher Field at 7:30pm has been named!