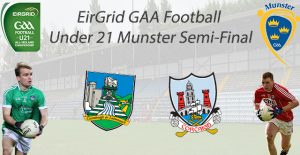 Cork defeated Limerick by 2-10 to 0-10 in the Eirgrid Munster Under 21 Football Championship Semi-Final on Wednesday March 15th at Pairc Ui Rinn.

Cork edge through as Limerick pay the penalty

Report by Denis Hurley for the Irish Examiner newspaper

Cork 2-10 Limerick 0-10: In the end, Cork reached a seventh straight EirGrid Munster U21FC final as Limerick were overcome at Páirc Uí Rinn last night, but it was far from straightforward.

One could say that Limerick’s extra-time quarter-final win over Tipperary ultimately had two effects which cancelled each other out — the match practice advantage they had over Cork allowed them to outperform their hosts in the first half, but the 80 minutes caught up with them as the Rebels held them to just a point in the second half.

The game wasn’t fully safe until sub Michael Hurley goaled for Cork at the death, but they showed a big improvement in the second period, which left manager Seán Hayes pleased.

“I’ve been saying all week that the 80 minutes they had last week would stand to them,” he said. “It took us 30 minutes to get up to championship pace but thankfully, we showed our merit and came back and had a great second half. We improved as the game went on and we made some good substitutions.”

The game could arguably be distilled to a few knife-edge moments. Limerick could have moved five ahead in the first half but for a missed penalty. Then, with Cork ahead by one in the second half, Limerick were wide with what would have been a levelling free and were immediately punished by a Hurley point.

Just before Hurley opened up a three-point lead, some Limerick supporters felt they should have had another spot-kick but referee Rory Hickey deemed Seán Wilson’s challenge on Brian Donovan to have been good defending.

“The ball went the other way so obviously Seán got a touch to put it out,” Hayes said.

After falling behind early, Cork looked to have asserted themselves when they pushed ahead through a fifth-minute goal. Full-forward Maidhcí Ó Duinnín was the man who got it, slotting home nicely, but Seán Powter was the architect and engineer, creating the opening with a surging run halfway before offloading perfectly.

However, it didn’t knock Limerick out of their stride and the visitors would score six of the next eight points. Hugh Bourke’s free-taking was excellent while Donovan and AJ O’Connor were also on target, but the penalty was certainly a missed opportunity. The score stood at 0-7 to 1-2 for the Treatymen when O’Connor forced a turnover and fed Bourke, whose shot was illegally blocked by Cork full-back John Dineen.

O’Connor struck the penalty well, but Ross Donovan in the Cork goal pulled off a great save. Limerick goalkeeper Richard Hayes did have the next score with a free from distance, but Cork had called in the cavalry with Michael Hurley and team captain Seán O’Donoghue sprung from the bench before the first half was out.

Hurley and then Gary Murphy made the gap more manageable and though Bourke’s fourth point left Limerick leading by 0-9 to 1-2 going in, Cork had achieved parity within three minutes of matters resuming and then pushed ahead, with Brian Coakley prominent.

Bourke levelled, but that was their final score as Hurley took over. He finished with 1-3, Powter once again the creator for the late second goal for a perhaps flattering six-point margin.

Limerick manager Declan Brouder felt that it was a case of his team running out of legs as much as anything.

“It’s really down inside there,” he said, “they left everything out there but unfortunately in the second half we ran out of energy, I think the extra time last week caught up with us.”

Instead of dwelling on whether they should have had a penalty, Brouder preferred to take the positives. “Right now, the game is over, there’s no point getting drawn on it,” he said. “We had a penalty in the first half that we missed, this wasn’t given, we’ll look back on the video and we’ll see.

“I’m just proud of my players, I felt we bossed the first half, it was almost an injustice that we were only two ahead at half-time. No matter what happens, we’ll always have pride and we’ll always stay together.”

Sub Michael Hurley scored 1-3 as Cork saw off Limerick at Páirc Uí Rinn to reach the EirGrid Munster U-21 football final for the seventh year in succession.

Senior star Hurley, brother of Brian, had been kept in reserve as he returned from injury but both he and captain Sean O’Donoghue were introduced in the first half as Cork struggled against an impressive Limerick side. Hugh Bourke and Brian Donovan had been among the scorers as the visitors moved 0-7 to 1-2 in front, Maidhci O Duinnin with the Cork goal, but they could have been further ahead but for a good penalty save by Cork’s Ross Donovan from AJ O’Connor.

Limerick goalkeeper Richard Hayes had a long-range free after that but Hurley and Gary Murphy had Cork back to a point before Bourke’s free left it 0-9 to 1-4 at half-time.

Brian Coakley (two) and Stephen Sherlock pushed Cork in front on the resumption, and while Bourke was on hand to level for Limerick once more, it would prove to be their last score. Sherlock and a pair of Hurley points gave Cork their biggest lead of the game as the end neared, and at the death Sean Powter set Hurley up for the clinching goal.

Super sub Hurley hit 1-3 as Cork came from behind to defeat Limerick in tonight's Munster U21 semi-final https://t.co/ejUvSb8aDQ pic.twitter.com/bp8jc9eLsY

Who will contest the 2017 EirGrid Munster Under 21 Football Final on March 29th?

The Cork U21 Football team for next Wednesday Munster U21 Football Championship game has been announced.https://t.co/8yCrcCcPZR

The Cork team to play Limerick in the EirGrid Munster U21Football Championship next Wednesday 15th March @ 7.30pm in Pairc Ui Rinn has been announced as follows.