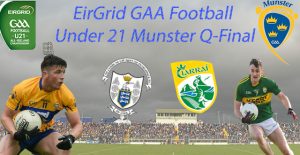 Kerry defeated Clare by 1-17 to 2-8 in the Eirgrid Munster Under 21 Football Championship Quarter-Final on Wednesday March 8th at Austin Stack Park Tralee.

Kerry overcome Clare to progress in Munster U-21 Football Championship

Kerry … 1-17, Clare … 2-8: Kerry will play Waterford in the Munster U21 football semi-final next Wednesday after this less than convincing quarter-final win over Clare.

It was only in the last quarter that the Kingdom pulled clear, kicking four points in-a-row between the 46th and 57th minute to slowly kill off the Clare challenge. The Banner had cut the deficit to the minimum when Éimhin Courtney bagged their second goal on 39 minutes. They’d kick only two more points, though, in the remaining 20 minutes.

Kerry went in at the break three in front, but it’s unlikely that management were wholly enamoured by their team’s first-half showing. The visitors opened up the Kerry defence for four goal chances, taking the last of these on 23 minutes.

Half-back Conall Ó hAiniféin gathered possession around the middle of the field, before cutting straight through the heart of the home defence and beating Shane Ryan with a well-placed effort. The goal brought Clare to within two points of Kerry, 0-8 to 1-3, but the response from Jack O’Connor’s side was as quick as it was clinical.

Matthew Flaherty opened his account and the gap was back to five when Cathal Banbury set-up Matthew O’Sullivan for a Kerry goal on 25 minutes.

You’d have expected the favourites to push on here and drive a significant wedge between themselves and their opponents come the break, but, instead, it was Clare who played the better football approaching half-time. The Banner counter-attacked with purpose and yet another Ó hAiniféin ended with a white flag, with Conor Finucane’s second free further narrowing the gap.

Adult General Admission: €10.00
Concession (Student/Senior): €5.00 rebate available on full priced Adult tickets on match day prior to entry with valid ID
Juvenile (Under 16 years of age): Free of Charge
All tickets for this match are UNRESERVED

Pick up a copy of Wednesday’s 16 page souvenir match programme for 2 euro.