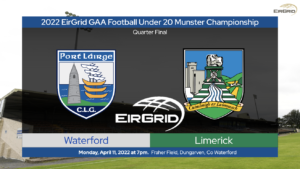 Limerick defeated Waterford by 2-9 to 1-6 in the EirGrid Munster Under 20 Football Championship Quarter-Final on Monday April 11th at Fraher Field Dungarvan.

WATCH: @LimerickCLG had enough to beat @WaterfordGAA and advance to a home semi final against Cork in the @MunsterGAA @EirGrid U20 football championship. https://t.co/C67c4d9AvN

Goals in either half from David O’Shaughnessy and Darragh Murray saw Limerick advance to the last four of the Munster Championship on a damp and dreary Monday night in Dungarvan.

Seamus O’Donnell’s side were much slicker with tricky corner-forward O’Shaughnessy shooting 1-2 and towering midfielder Murray posting 1-1. They had seven different scorers. Waterford only registered three scores from play over the hour. Sub Eoin O’Callaghan fired home a late, late goal to put a gloss on the scoreboard.

In the teeming rain, the teams traded two points each in the first quarter. Kyle Cuddy kicked two frees for Waterford while David O’Shaughnessy (free) and Darragh Murray were on target for the visitors.

On 18 minutes, O’Shaughnessy won a penalty when he was dragged back by Rian Hayes. The Waterford number four was shown a yellow card. The Limerick corner forward dusted himself off and sent Gavin Buckley the wrong way from the spot.

Conall Ó Duinn and O’Shaughnessy added points for the Shannonsiders to make it 1-4 to 0-2 by the 23rd minute. Waterford goalkeeper Buckley flicked the ball away when Emmet Rigter seemed certain to finish an Ó Duinn pass across goal.

Waterford recovered towards the end of the half as Cian Browne kicked their first from play on 28 minutes from 45 metres out. Cuddy’s third free left the Déise 1-5 to 0-5 adrift at the break. Cork whistler Cormac Dineen blew for 23 first half frees and 48 in total.

Points from Darragh Bridgeman, Eoin McGrath and Jamie Baynham moved the Treaty men six up early in the second period. Sean Kilbridge blasted wide after he waltzed through the Waterford defence.

Conditions worsened as the rain started to pelt down. On 42 minutes, Conall Ó Duinn and Emmet Rigter set up Darragh Murray for Limerick’s second green flag. Déise skipper DJ KIely struck their only second half point on 45 minutes. Limerick scorer David O’Shaughnessy was black-carded for a late tackle but the hard work was done at that stage.

The Shannonsiders will host Cork in the Munster semi-final next Monday night.

This game is being streamed live by Munster GAA.

Limerick Under 20 Football team to play Waterford in Munster Championship is selected, https://t.co/gYH5o3HKSz

Don’t forget to pick up a copy of the match programme tonight for 2 euro. 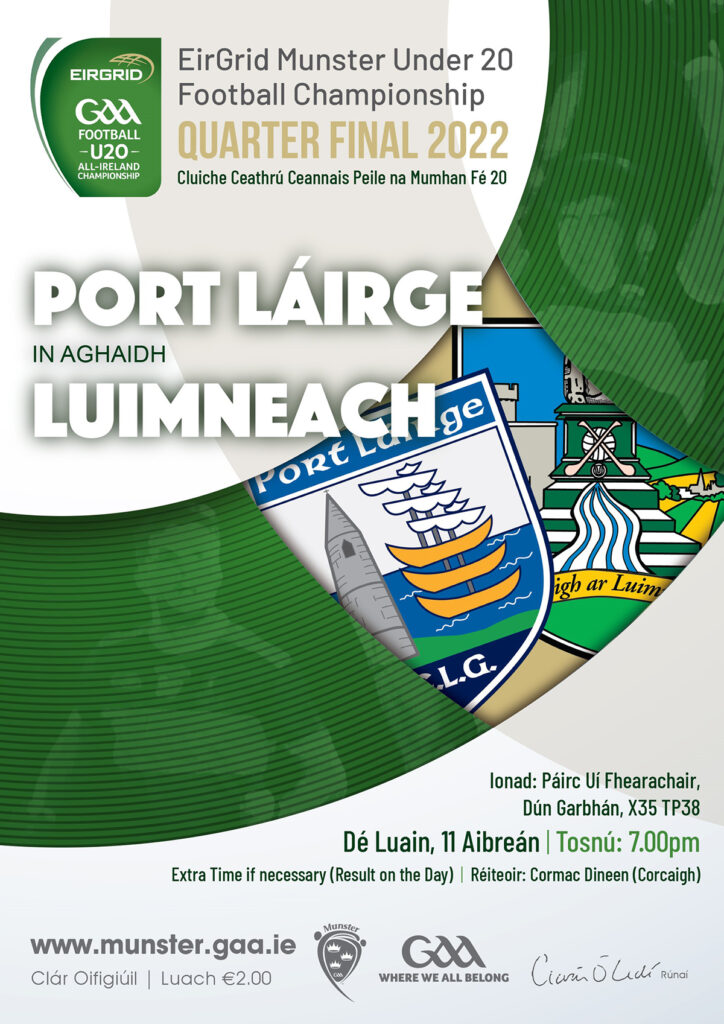