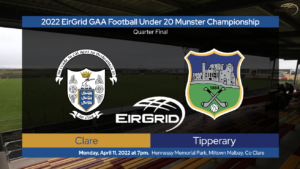 Clare defeated Tipperary by 3-15 to 2-5 in the EirGrid Munster Under 20 Football Championship Quarter-Final on Monday April 11th at Hennessy Memorial Park Miltown Malbay.

WATCH: @GaaClare U20 Footballers were too good for @TipperaryGAA and advance to play Kerry in the @MunsterGAA @EirGrid U20 football championship semi final. https://t.co/WdKKGvKXHJ

It was a victory 26 years in the making but there was no doubting its merits when it finally came as Clare eased into the last four of the Munster U20 Football Championship in Hennessy Memorial Park in Miltown Malbay last night.

One would have to go back to 1996 to find the Banner County’s last victory over Tipperary at this grade. However, having completed back-to-back wins over their neighbours in the provincial minor equivalent three years previously, Clare maintained that hold with a commanding collective display.

With joint-captains Fionn Kelleher and Eoin Rouine, Brian McNamara, Brendy Rouine, Micheál Garry and Sean McNamara dominating the centre, Clare kicked a decisive 3-6 without reply to carve out an unassailable 3-8 to 1-0 advantage only five minutes into the new half.

The hosts actually managed to kick more wides than scores in the opening period but perversely would be sparked into life when falling behind to a superb solo goal for Jamie Holloway in the tenth minute. One of only two Tipperary shots at the posts in a cautious opening period, Clare would not only immediately respond with an emphatic Brian McNamara goal from the kick-out but added a further 1-3 for the remainder of the half.

The second goal came just before the break and was a deserved reward for the home side’s vast superiority as Brian McNamara and Thomas Meenaghan combined for the roving Sean McNamara to make space and fire to the bottom left corner of the net for a 2-5 to 1-0 interval cushion.

Any murmurings of a backlash were quickly quashed on the resumption when Shane Griffin found the net inside the opening minute. With the margin at 15 points at the turn of the final quarter, to their credit, Tipperary still refused to yield and did finish with a 1-1 in injury-time, with Cathal Deeley unleashing an unstoppable consolation goal in the 62nd minute.

The only downside for Clare was an ankle injury for hugely influential centre-back Fionn Kelleher late in the contest. That injury resulted in the home side finishing with 14 men albeit that the numbers were subsequently balanced when Tipperary captain Tadgh Condon was dismissed for a second yellow.

Clare’s reward for such a comprehensive victory is a home semi-final against Kerry back in Miltown Malbay next Monday evening as they bid for a first provincial Under 20 decider appearance in 21 years.

This game is being streamed live by Munster GAA.

Don’t forget to pick up a copy of the match programme tonight for 2 euro. 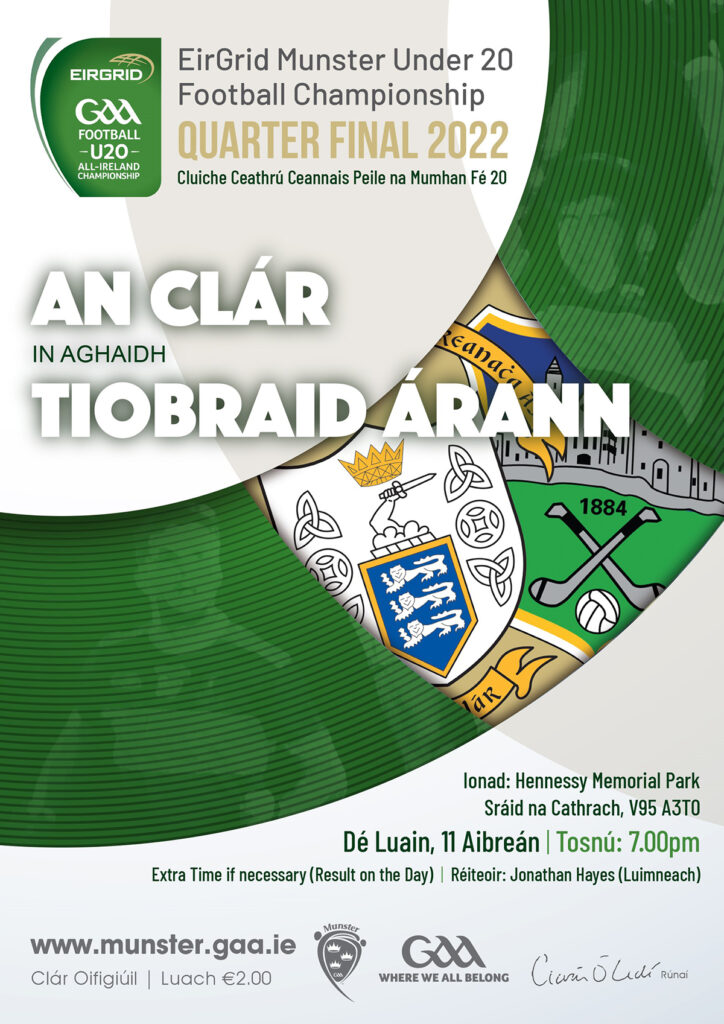