Midleton CBS defeated CBC Cork by 2-12 to 0-14 in the Dr. Harty Cup Under 19 A Hurling Final on Saturday February 16th at Pairc Ui Rinn.

A Joe Stack goal on 53 minutes was the crucial score in delivering Midleton CBS their fourth Harty Cup crown.

Stack’s goal arrived after Midleton had struck five consecutive wides and were failing to in anyway capitalise on this spell of dominance. Stack’s initial effort was superbly smothered, but he followed up and buried the sliotar to the Christians net to move the East Cork College into a 2-10 to 0-13 lead.

A Padraig Power free subsequently cut the gap to two, but Power sent another placed effort thereafter left and wide and no closer would Christians come of their opponents.

Two Ross O’Regan frees completed the scoring for Midleton CBS to leave them celebrating a first Harty success in 13 years, a victory which played out in front of a 7,089 strong crowd. For five of the Midleton starting team, there was sweet atonement having been part of the side which lost the 2018 final to Ardscoil Rís.

Christians, bidding to secure a first ever Harty crown, will rue a number of goal chances which they failed to put away. A measly total of five points from play, also, is a stat which they’ll be disappointed with. On 44 minutes, Padraig Power could – and probably should – have had a Christians goal. Midleton ‘keeper Jack McGann and defender Cormac O’Brien kept the sliotar out, play was worked down the other end with Ross O’Regan earning a free which Ryan McCarthy converted to edge Midleton into a 1-10 to 0-12 lead.

The sides were level at 1-7 to 0-10 at the end of a tentative first-half which failed to catch fire. Both sides created ample goal chances, but a lack of composure in pulling the trigger, along with two excellent blocks, one by Christians goalkeeper Cian Long and the other by his teammate Cillian O’Donovan, meant Jason Hankard’s third-minute major – the Fr O’Neill’s forward touched Ryan McCarthy’s free to the net – was the sole green flag of the half.

A Ross O’Regan point followed the goal to put Midleton four ahead, an ideal start which lay in stark contrast to their poor opening 12 months ago. That said, Christians soon arrived at the pace of proceedings and clipped seven of the next eight scores. Padraig Power was responsible for three of these, with his Blarney clubmate Declan Hanlon sniping a pair of points.

Midleton’s tactic at the other end of the field was to pump high ball in on top of Hankard and they were experiencing some joy in this regard. Two Ryan McCarthy placed ball efforts – the second stemming from a brilliant Cian Long save to deny Joe Stack – had the East Cork college back level, 1-4 to 0-7, on 22 minutes. It was tit for tat from there to the break, Cathal Hickey and Shane Barrett throwing over fine points for their respective sides.

In the end, it was the two goals which proved the difference.

The #HartyCup is a step up in quality from inter-club competitions, writes Donal O'Grady #GAA https://t.co/PsD5LUHlxc

Pick up a copy of the 44 page souvenir match programme for the Harty Cup and Tom Collum Cup Final double-header for 3 euro. 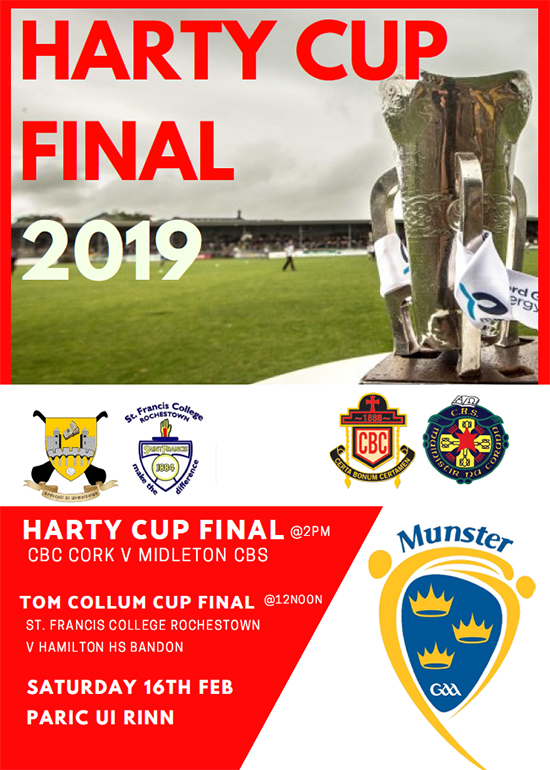