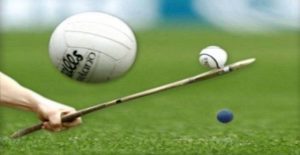 RONAN Lynch inspired Ardscoil Rís to Dr Harty Cup glory against Scoil na Tríonóide Naofa Doon at the Gaelic Grounds in Limerick this afternoon. The 2013 Munster GAA minor player of the year scored 0-6, including five in the second half, as Ardscoil claimed a third Harty Cup title in five seasons. In the first all-Limerick decider, Ardscoil came good after half-time to add another Munster senior colleges A title to their 2010 and 2011 successes.

Ardscoil led by just two points at half-time, 0-4 to 0-2, in front of 3514 spectators but they produced a powerful second half performance to win by 15 points. Doon managed just a point from play during the entire game, scored by substitute Mark Coleman, as Ardscoil proved resolute in defence, with corner back Eoghan Costelloe particularly good. Further up the field, Ardscoil had proven matchwinners in Ronan Lynch, Cian Lynch and Ian Galvin (brother of Clare senior star Colm). And when Colin Crehan netted Ardscoil’s first goal midway through the second half, the tie was over as a contest.

That score handed the winners a 1-8 to 0-2 lead and with the breeze at their backs, they went on to inflict further pain on Doon. Galvin cracked home a second goal with nine minutes remaining and Doon’s afternoon was summed up when Barry Murphy saw his ground shot cannon to safety off the post in the 53rd minute. Ardscoil are safely through to the semi-finals of the All-Ireland series (Croke Cup) and Doon now attempt to regroup for a crack at the Connacht champions in the quarter-finals.

John O’Brien (Arravale Rovers and Tipperary) will be the referee for the Harty Cup Final and he will be joined all Tipperary officials – linesmen Fergal Horgan and John McCormack (both Knockavilla Donaskeigh Kickhams) and umpires James O’Brien, Roger O’Connor, Brian Glasheen and Darren Lowry (all Arravale Rovers).