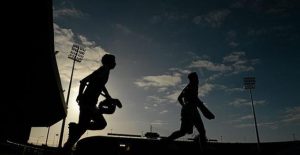 Ardscoil Ris got their 2014/2015 Dr. Harty Cup campaign off to a good start with a 1-20 to 0-9 victory over Blackwater Community School at Cahir on Wednesday. The defending champions got off to the perfect start with a Ronan Lynch goal after 5 minutes to race in to a 1-3 to 0-0 lead. By the end of the first quarter, Ardscoil Ris had extended their lead to 1-8 to 0-1 before going in at half-time leading by a commanding 13 points, 1-13 to 0-3. The second half was a more even affair with the result never really in doubt as Ardscoil Ris ran out winners by 1-20 to 0-9. Ardscoil Ris captain Ronan Lynch was the man of the match scoring 1-9, 1-2 from play.

In the other game in Group 1, Thurles CBS proved far too strong for St. Flannans Ennis when they recorded a 5-26 to 0-6 victory at MacDonagh Park Nenagh. St. Flannans started the better team in the opening exchanges as they led by the odd point in seven after 10 minutes, 0-4 to 0-3 while playing with the wind. Thurles CBS responded with a Robbie Long goal soon afterwards and went on to dominate the second quarter to race in to a 1-13 to 0-5 lead at the interval. The second half proved to be no contest as Thurles added four more goals and another 13 points to record a 35 point victory as Flannans scored just 2 points in the last 50 minutes of the game. Thurles CBS had fine displays all over the park, none more so than Hat-trick hero Robbie Long at corner forward. Other to impress for Thurles CBS were Paul Kennedy, Ronan Teehan, Billy McCarthy & Enda Heffernan. Thurles CBS have laid down a marker in group 1 and an appetising fixture awaits on the 10th of November, when they face the defending champions Ardscoil Ris.

In Group 2, St. Colmans Fermoy came from behind to defeat last years finalists Scoil Na Trionoide Naofa Doon by 0-18 to 0-14 at Leahy Park Cashel. In a lively contest, both schools recorded points in the opening minute before the Doon side took control. Despite playing against the breeze, Doon played the more direct hurling in this period and led by 0-8 to 0-4 after 16 minutes. St. Colmans had a goal disallowed for a square infringement after 20 minutes but it did not affect the young Cork side as they rattled off 5 of the next 6 points to reach the interval all square – 0-9 to 0-9. The first ten minutes of the second half was high on intensity but low on scores as both schools added just a single point to their tally. Despite facing in to the breeze now, St. Colmans were now beginning to dominate at half-back and midfield and they took the lead for the first time on 40 minutes. Doon equalised but Colmans were now the dominant team as they rattled off four unanswered points in a a 5 minute purple patch to take a 0-15 to 0-11 lead with ten minutes remaining. Doon reduced the gap with two further points but despite some late pressure from Doon, St. Colmans added three further points in the closing stages to run out winners by four points.

Visit Munster GAA Facebook for photos from this game

In the other Group 2 game, Gaelcolaiste Mhuire defeated De La Salle College by four points in a thriller played at Ardmore. An early Evan Ó Síocháin goal put Gaelcholáiste Mhuire in the driving seat before DLS got back in to the game to trail by just two at the break. DLS pushed forward after the break but met stern resistance from a solid Gaelcholáiste defense, who picked off three in a row to maintain their lead. The game was nip and tuck until the end with Gaelcholáiste holding on for a 1-14 to 1-10 victory.

In Group 3, two goals by Shane Kingston helped St Francis Col Rochestown to a seven point victory over Charleville CBS at Mallow. The first half began well for Rochestown as they led by 0-5 to 0-2 after the first quarter. Charleville then scored four unanswered points to take the lead after 25 minutes but Rochestown scored 3 of the next 4 points to lead at half-time by 0-8 to 0-7. This game was decided in the 10 minutes after half-time as Shane Kingston netted in the 33rd and 38th minutes to put Rochestown in front by 2-9 to 0-8. Charleville tried valiantly to get back in to the game but Rochestown held firm and ran out 2-14 to 0-13 winners. Ciaran Cormack scored 9 points for the winners while Shane Kingston scored 2-4. Others to do well for Rochestown were Donnchadh Murphy, John Cashman, John O’Sullivan and Cormack Kingston. Charleville’s best players were Paddy O’Loughlin, Jack Doyle, Darragh Fitzgibbon and David Jones.

In the other group 3 encounter, Pobalscoil na Tríonóide Youghal edged out Our Lady’s Templemore by two points in Clonmel. The Youghal side led by 0-11 to 1-7 at the interval before second half goals by Declan Dalton (scorer of 1-14) and Conor Hennessy helped them to victory. Lyndon Fairbrother and Jamie Bergin scored the Templemore goals.

In the other Group 4 game, Dungarvan CBS dominated the second half to secure an 11 point victory over High School Clonmel at Cappoquin. In a low scoring first half, Dungarvan opened the scoring with a point after 5 minutes and led by 0-4 to 0-1 after the first quarter. Clonmel came more in to the game in the second quarter and reduced the deficit to a solitary point at the interval, 0-6 to 0-5. The teams shared the first four points of the second half as the game looked set to go down to the wire. However, two goals in three minutes at the end of the third quarter by corner-forward Glen Waters and wing-forward Mikey Phelan midway through the second half helped Dungarvan CBS to take control and Clonmel failed to score in the final quarter as Dungarvan added three further points to win by 2-11 to 0-7.

Click to view a match report by Tomas McCarthy

The Munster GAA Post Primary Schools Senior A competitions will get underway this week with 8 fixtures in the Dr. Harty Cup Under 18 1/2 A Hurling competition.

During the group stages of the Dr. Harty Cup Hurling (beginning October 1st) and Corn Uí Mhuirí Football (beginning October 22nd), we will select a “Game of the Week” to focus on, providing a press pack, details of the team panels, match preview, live score updates and photos of the game via social media and a match report afterwards.

As the Dr. Harty Cup begins, our “Game of the Week” this Wednesday will focus on the first game of the defending champions Ardscoil Ris playing Blackwater Community School at 1:30pm in Cahir, County Tipperary.

The eagerly awaited 2014/2015 Dr. Harty Cup competition gets underway this week with a cracking game down for decision as defending champions Ardscoil Ris take on Blackwater Community School from Waterford.

Limerick & Waterford have dominated the Munster Inter-County Minor Hurling landscape during the last two summers with Limerick capturing back to back Minor titles (both after replays in Thurles) with Waterford providing the opposition. While Waterford were able to go on and win All-Ireland honours in 2013, Limerick fell just short a few short weeks ago, losing out to a strong Kilkenny outfit in the 2014 All-Ireland decider.

Wednesday’s game will see a number of the Limerick & Waterford Minor panels of 2014 in action for their respective schools. Ardscoil Ris can call upon the services of Ronan Lynch (Na Piarsaigh) as he enters his fourth Dr. Harty Cup campaign while other 2014 Limerick Minors available to Ardscoil Ris include Patrickswell’s Aaron Gillane and Na Piarsaigh duo Peter Casey and Thomas Grimes. Add in Clare minors Paraic O Loughlin (Clonlara) and Nathan Fox (Parteen) and the strength of this Ardscoil Ris panel is formidable as they look to win the Harty Cup for the fourth time in five years. The Ardscoil Ris selection team includes Limerick hurler Niall Moran and 2013 Clare Under 21 Hurling captain Paul Flanagan in addition to Fergal Lyons & Barry Hennessy.

Blackwater Community School on the other hand may go in to this game as underdogs but can call upon the services of All-Ireland Minor Hurling medalists Shane Bennett (Ballysaggart) and Colm Roche (Shamrocks) to lead their challenge. Add in 2014 Waterford Minor Hurling panelists such as David Prendergast (Lismore), Jordan Henley (Tallow) and Aaron O’Sullivan (Cappoquin) and it’s safe to say that Ardscoil Ris will not have this game all their own way. The Blackwater selectors include Alan Lawlor, Colin Perrott & Kieran Walsh.

Victory in this Group 1 opening game could be very important as there are no easy games with St Flannans, Thurles CBS and West Limerick Colleges also involved in what is arguably the toughest of the groups with only two teams qualifying for the Quarter-Finals. Noel Cosgrove of Tipperary is the referee for this game beginning at 1:30pm in Cahir this Wednesday October 1st and a good crowd is expected.

Next Round – Ardscoil Ris have a bye in Round 2 and their next scheduled game in the competition will be a Round 3 fixture versus Thurles CBS on November 10th. Blackwater CS will play St. Flannans in Round 2 on October 15th.