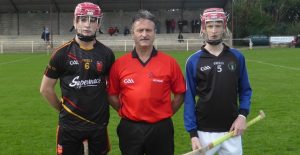 Dean Ryan Cup Under 16 ½ A Hurling

Defending champions Ardscoil Ris Limerick survived a significant challenge from Nenagh CBS in a titanic opening round clash in the Dean Ryan Cup at Newport on Wednesday. Played in 20C temperatures, Ardscoil Ris won the toss and elected to play with the strong breeze.

In the opening half, both sides struggled to cope in the windy conditions, getting numerous opportunities for scores but not putting pressure on the umpires to raise any flags in the opening quarter. Ardscoil Ris took five minutes to open their account when they scored two points in quick succession. Nenagh CBS were doing well in the possession stakes but took until the 11th minute to score their first point. By the 15th minute, the teams were level at 0-2 apiece but had combined to hit 9 wides, 5 for Nenagh at this stage.

Ardscoil Ris got on top in the second quarter and looked to have scored a goal in the 21st minute only to have the score ruled out for a square ball infringement. While the teams were level at 0-4 apiece after 24 minutes, eventually the dominance of Ardscoil Ris with wind assistance began to take hold and the Limerick school added the final four points of the opening half to leave the interval score – Ardscoil Ris 0-8 Nenagh CBS 0-4. The tally of 12 scores was offset by 16 wides in that opening half with 10 for Ardscoil Ris.

Nenagh CBS needed a good start to the second half to attempt to reduce the deficit but instead were hit with a sucker punch when Aidan Moriarty struck for an Ardscoil Ris goal in the first minute to give his side a 7 point lead. Slowly but surely however, Nenagh began to take control with their puckouts in particular now reaching the Ardscoil Ris square as the strong wind intensified. This pressure eventually told when Nenagh scored a goal in the 39th minute. This was followed by two quick points and heading in the final quarter, the sides were level with Nenagh seemingly having all the momentum.

Ardscoil Ris to their credit stayed calm and through intelligent short passing against the wind, managed to score two points in quick succession to stem the tide. Nenagh’s cause suffered a major set-back in the 49th minute when following a lengthy skirmish, they were reduced to 14 men. Ardscoil Ris capitalised almost immediately when Aidan O’Connor scored his side’s second goal. Nenagh would reduce the deficit to just three points with five minutes remaining on the clock but Ardscoil Ris dominated the final stages, scoring four of the last five points in the game to run out winners by a somewhat flattering six point margin after an excellent contest.

Ardscoil Ris will now go forward to play Midleton CBS in the Quarter-Final scheduled for next Wednesday October 5th.