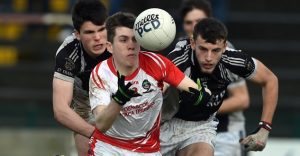 By Eoghan Cormican from the Irish Examiner newspaper

Tour-de-force performances from Tom Ó Súilleabháin and Cathal Ó Bambaire secured a fourth consecutive Corn Úi Mhuirí crown for Pobalscoil Chorca Dhuibhne this afternoon. It was further heartbreak for the vanquished St Francis College, Rochestown. The three-point defeat represented their second Munster final loss in the space of a fortnight, having come up short against Thurles CBS in the Harty Cup decider.

Conchúir Ó Géibheannaigh pounced for the only goal of the contest after seven minutes and it was a lead they would never relinquish thereafter. Shane Kingston and Ciaran Cormack were on the mark for Rochestown approaching the break, Liam Ó Murchú’s side trailing 1-3 to 0-4 at the interval.

Conchúir Ó Géibheannaigh and Cathal Ó Bambaire split the posts for the reigning champions early upon the change of ends, but their march to victory was halted by three on the hop from Roco – Cormack, Kingston and Liam Dineen on target. Rochestown were unable to hit the front and Pobailscoil Chorca Dhuibhne made the decisive break through the left boot of Tom Ó Súilleabháin to secure the four-in-a-row.

Comhairle Iarbhunscoileanna Na Mumhan would like to clarify that they attempted to avoid a clash of fixtures with the Allianz Football League game involving Cork & Kerry. Due to circumstances in the schools, a date change wasn’t feasible and this binds the committee by rule to play the match as originally scheduled on the agreed replay date of the 8th March. Comhairle Iarbhunscoilenna Na Mumhan has upheld it’s fixture procedure which state ‘that all fixtures will be played at a neutral venue with equal traveling distance for both teams unless otherwise agreed by both schools’.