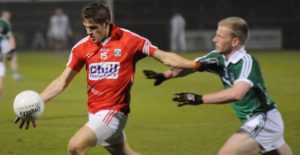 Cork defeated Limerick by 3-15 to 0-8 in the Cadbury Munster GAA Football Under 21 Championship Semi-Final on Wednesday March 19th at Pairc Ui Rinn.

Sixteen points separated the sides at the end as Cork remained on track for a fourth consecutive Munster U21 football title at Páirc Uí Rinn last night. Three first-half goals went a long way towards seeing off a Limerick side who were never really given a chance to compete, with Dan Mac Eoin (scorer of 1-5), Alan Cadogan (1-4) and Mark Sugrue (1-2) standing out in the Cork attack.

Given that a big victory was widely expected beforehand, Cork manager Seán Hayes was not getting carried away. “You can’t read too much into it,” he said. “We did the job, we won the game, that’s what we hoped for, not to get caught. Sometimes these can be banana skins but we got the goals in the first half. “We weren’t right, we made an awful lot of silly mistakes and we have to improve, but it’s good to have a bit of room for improvement. “We were asking them to keep the workrate up in the second half, but it’s easy on the sideline, they knew on the field it was won. They went through the motions I know but we won and we have a final against Tipperary on April 9, that’s a different battle.”

What will have been encouraging is that Cork achieved victory without Cathal Vaughan, Kevin Crowley and Brian O’Driscoll, all of whom have been involved with the seniors. Hayes is optimistic that they will be back for the final in a few weeks. “We’d hope so,” he said. “I wouldn’t know the dates, but they were all running at half-time. Kevin Kavanagh pulled out as well, so we were missing a few players who’d be challenging for starting spots. “The other side of that was that we were able to give Sam Ryan and Alan O’Connor a first time ever wearing the Cork jersey in championship.”

Cork gave notice of their attacking incisiveness as early as the second minute, when Seán Kiely and Dan Mac Eoin cut through the visitors’ cover. When the ball was worked to Alan Cadogan, he handpassed across and while Cian O’Sullivan’s palmed effort was just over, it was clear there were goals there for the hosts.

The clock hadn’t even reached 10 minutes when the first of them arrived, Mark Sugrue profiting from David Harrington’s pass to make it 1-3 to 0-1. Limerick responded through Danny Neville and Kevin Moore but then Cadogan got Cork’s second goal, finishing smartly after the ball had broken around the goalmouth.

When Mac Eoin had the easy task of palming in Cadogan’s handpass shortly after that, it was 3-3 to 0-4. With Ian Maguire very influential at midfield, Cork then reeled off four unanswered points, Mac Eoin with a pair of beauties and Sugrue and Cadogan also on target.

Neville and Mike Fitzgibbon pointed for Limerick before half-time to leave them trailing by 10 at the break, but another two points was all they managed in the second period. Cork had pushed 14 clear before withdrawing their stars as the life began to seep out of the game. Harrington should probably have had a fourth goal but for a good save by James O’Meara and sub John Corkery also got on the scoresheet.

At the other end, Darragh Treacy — who has started for Limerick seniors in the league this year but was only introduced as a first-half sub here — came close to a goal but a great Jamie Davis block meant that only a 45 was coughed up. That was emblematic of the strong Cork defending throughout, and Hayes knows that it will be important again in the decider. “They’re a good team (Tipperary), they won the minor All-Ireland three years ago,” he said. “We’ll be the underdogs even though it’s on in Cork. They beat Cork by nine points in the Munster minor final, so we know it’s going to be tough.”

GOALS FROM MARK Sugrue, Alan Cadogan and Dan MacEoin helped Cork cruise into the Munster U21 football final tonight with a comfortable semi-final win over Limerick at Páirc Uí Rinn.

MacEoin scored 1-5 with Cadogan grabbing 1-4 as the Rebels kept alive their hopes of a fourth successive provincial title at the grade. They will now face Tipperary in the final for the second successive year but will have home advantage for the game on April 9th.

Mark Sugrue struck Cork’s first goal in the 10th minute, the hosts led by 1-3 to 0-1 and further strikes to the net followed by Cadogan and MacEoin as Cork raced clear by 3-3 to 0-4.

By the break they had extended that advantage to 3-7 to 0-6 as Cork built on last week’s opening round victory over Kerry in Tralee. Danny Neville and Mike Fitzgibbon did their best to keep Limerick in touch on the scoreboard but they never looked like overhauling Cork. Even with senior defenders Kevin Crowley and Brian O’Driscoll absent through injury, Cork did the business to ensure their hopes of claiming a fourth successive Munster U21 title are still on track.

Adult tickets can be purchased in advance at any Centra or Supervalu shop. Students / OAP’s pre purchasing should buy the full price adult ticket and get a concession of €5 on the evening of the game.

Next Round – the winners play Tipperary or Clare in the Munster Final on Wednesday April 9th at 7:30pm

The Cork U21 Football team to play Limerick on Wednesday night at 7.30pm in Páirc Uí Rinn will line out as follows:

There are three changes to the starting fifteen for Wednesday night’s game. Kevin Crowley aggravated a groing injury during the Allianz League defeat to Mayo on Sunday, while Brian O’Driscoll has not recovered from the hamstring problem which saw him taken off during the defeat of Kerry. Kevin Fulignati (Nemo Rangers) and Kieran Histon (Cobh) are their replacements at wing back, while Killian O’Hanlon (Kilshannig) starts at mid-field in place of Darragh Murphy.

Cathal Vaughan, who was withdrawn due to injury before the quarter-final, is not yet fully fit, and TJ Brosnan continues his recovery from a broken jaw.

Cathal Vaughan (Iveleary) – Not considered due to injury

Brian O’Driscoll (Tadhg MacCárthaigh) – Not considered due to injury

Kevin Crowley (Millstreet) – Not considered due to injury

TJ Brosnan (Newmarket) – Not considered due to injury

Dylan Quinn (St. Finbarr’s) – Not considered due to injury

Sam Oakes ( Bishopstown) – Not considered due to injury