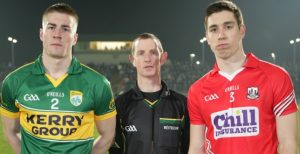 Cork defeated Kerry by 0-18 by 2-8  in the Cadbury Munster GAA Football Under 21 Championship Quarter-Final on Wednesday March 12th at Austin Stack Park Tralee. Played on a crisp, cold evening under the bright lights of Austin Stack Park, this was a close and entertaining game for long periods. Cork raced in to a 0-3 to 0-1 lead early on before Kerry hit back with a 16th minute goal by Gary O’Leary to take a 1-3 to 0-4 lead. Cork levelled the game with the next two points but were dealt another set-back with the concession of a penalty in the 25th minute. Kerry’s James Crean duly obliged to kick the ball to the net and this score helped Kerry to a 2-4 to 0-7 interval lead.

Cork started the second half strongly with the first three points to level the game. Although Kerry recovered to score the next two points but Cork’s play overall was improving and by the end of the third quarter, the scores were tied again with all to play for – 2-6 to 0-12. The next score was going to prove crucial and Cork can thank their goalkeeper Michael Martin for a full length save from Cillian Fitzgerald in the 46th minute when a goal would have been decisive. That next score did eventually come the way of Cork and this gave them the springboard to outscore Kerry by 0-6 to 0-2 in the final 10 minutes and run out deserving four point winners in front of an attendance of 3,404.

Cork will now go on to play Limerick in the Munster semi-final on Wednesday next March 19th at 7:30pm in Pairc Ui Rinn.

Post-Match Reaction from both camps

Supporters can purchase €10 tickets in advance from Centra & Supervalu outlets

The Cadburys Munster Under 21 Football Championship gets off to a cracking start on Wednesday night with the clash of old-firm rivals Cork and Kerry in Austin Stack Park Tralee. Cork come in to the game having won the last three provincial titles in this grade and with a sprinkling of players who have provincial Minor or Under 21 medals in the pocket. Kerry have not fared as well at underage level in recent years, winning the Munster Under 21 Football title on just one occasion since 2002.

Kerry’s underage record did show signs of improvement last year, securing the Munster Minor Football title and a number of those players have graduated to the Under 21 ranks. Fitzgerald Stadium has proved to be a fortress for Kerry Senior teams over the last 20 years and while Kerry have lost to Cork on home soil in the Under 21 grade twice in the last ten years, on both occasions it has been by a single point. The last meeting of the counties at this grade in Tralee resulted in a one point victory for Cork after extra time in the 2012 Final. Cork’s other success in recent times away to Kerry in Under 21 Football was their 0-13 to 0-12 win in 2004. The counties also drew in Killarney in 2006 by 0-10 to 0-10.

In more recent times, when the counties met in last year’s Under 21 Quarter-Final, Cork dominated for long periods restricting Kerry to no point from play over the first three-quarters of the game. In spite of that statistic, a late fightback by Kerry nearly earned a draw with Cork winning by 0-14 to 2-7 after an exciting finish. In the 2013 Minor Quarter-Final, the teams fought out an exciting 2-13 to 2-13 draw after extra time in Pairc Ui Rinn before Cork went on to win the replay by 3-6 to 0-10 in Tralee. Cork bowed out in the semi-final to Tipperary while Kerry regrouped to win back the Munster Minor Football crown after a gap of four years.

Looking ahead to the 2014 panels and Cork manager Sean Hayes can call upon six of the starting team which narrowly lost out to Galway in last year’s All-Ireland Final. Brian O’Driscoll, Seán Kiely, Ian Maguire, Mark Sugrue and Dan MacEoin, along with Cathal Vaughan who came on as a sub in that game are the players Cork will look to provide the required experience. Another player involved last year is this year’s captain Conor Dorman who has had a busy year thus far, scoring the winning point as UCC captured the Sigerson Cup in Belfast last month.

On the other side, Kerry manager Dara O Sé has named four of the team which lost out to Cork at this stage of the competition last year, namely Shane Murphy, Padraig Ó Sé, Tadhg Morley and Shaun Keane. Kerry also call on the services of two players from their 2013 Munster Minor winning team in Padraig Ó Conchúir and Greg Horan.

Given the week that’s in it as Cheltenham gets underway, predicting a winner here will be equally as difficult as any of the races across the water. Cork have the experience of winning at this grade while Kerry will look to make home advantage count and qualify for the next round where Limerick await the winners on March 19th. Keith O’Brien of Tipperary will be the referee with admission prices being €10 for adults, €5 for student and OAP’s while as with all games in this competition, all Under 16s are free. Best wishes to everyone involved teams for what promises to be an exciting encounter keeping in the tradition of the Cork and Kerry rivalry.

The Cork U21 Football team to play Kerry in the Cadbury Munster Championship Quarter-Final on Wednesday, March 12th at 7.30pm in Austin Stack Park, Tralee, will line out as follows:

Six of the starting fifteen from last year’s All-Ireland U21 Final defeat to Galway are named to start against Kerry on Wednesday night: Captain Conor Dorman, Brian O’Driscoll, Seán Kiely, Ian Maguire, Mark Sugrue and Dan MacEoin, along with Cathal Vaughan who came on as a sub in that game. TJ Brosnan, who also made an appearance in last year’s final, is not considered due to injury (broken jaw), while Alan Cadogan, who has featured for the Cork Senior hurlers in this year’s Allianz League, is named in the substitutes. Dorman, O’Driscoll, Vaughan and Kevin Crowley have also tasted Allianz Football League action this year.

The Kerry Under 21 Team to play Cork in the Cadburys Munster Under 21 Quarter Final at Tralee’s Austin Stack Park on Wednesday has been named. The team includes four of the side beaten by Cork at the same stage last year – Shane Murphy, Padraig Ó Sé, Tadhg Morley and Shaun Keane – while Kieran Murphy was introduced as a sub during that game. Both Padraig Ó Conchúir and Greg Horan played with Kerry Minors last year. There are three sets of brothers involved – the Keanes from Killarney Legion, the Crowleys from Templenoe and the Murphys from Kilcummin.

Nathan Breen of Beaufort, the only representative on the panel from County Champions Mid Kerry, captains the side.

The team is as follows: